The N5 billion Betrayal of Nnamdi Kanu; What I Told Igbo Clerics 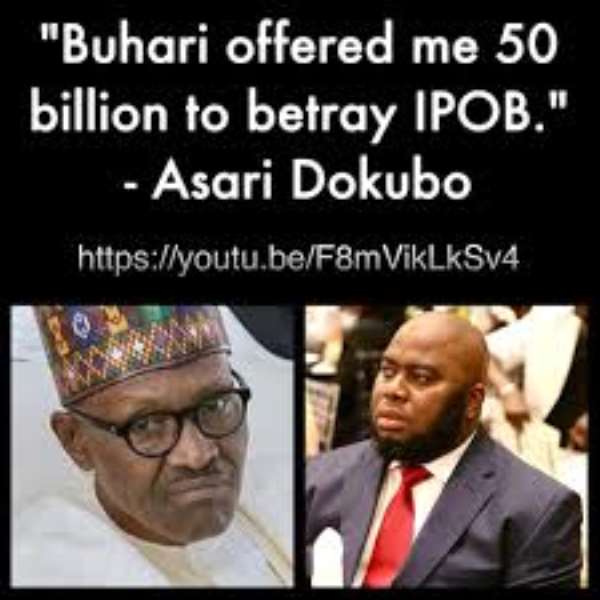 Since the past three weeks I have been summoned by notable Igbo Clerics, Archbishops, Bishops, Apostles of various denominations who knows me as long time Igbo and Church activist and queried about the claims that the leader of Indigenous Peoples of Biafra IPOB IPOB, Mazi Nnamdi Kanu, has been betrayed for the sum of N5 billion naira gift from the Department of State Services DSS in order to suspend the sit at home order.

Some clerics claimed N1 billion, N2 billion while some claimed N5 billion naira. When I inquired about the sources of the news, I was told that it ts news from the local chapters of IPOB who cited sources within the Presidency and DSS. The rumors of the betrayals by Barrister Alloy Ejimakor, Emeka Ejiofor, Emma Powerful and Edozien Madu has been rife since the third week of the sit at home order was cancelled, but how the misinformation persisted till date is what I cannot understand.

While discussing with the BOT Secretary of Igbo Think Tank ITT Comrade Ibegbu in Enugu last month about the Turning Igboland into the Japan of Africa Project TIJIA, of which I am a major driver, an aggrieved IPOB chieftain barged into our discussions and threatened to form a splinter group with his team if the aforementioned IPOB activists failed to vomit the billions they allegedly collected from the DSS, It took us another hour to convince the equally intellectually endowed Biafran that no such money exchanged hands.

Days later at Awkuzu, Anambra State, a christian prophet and a native doctor both confronted me together at a burial event, and swore that God and divination told them that Ejiofor and Ejimakor collected billions from Buhari to deceive Nnamdi Kanu, and they both promised to deal with these lawyers spiritually for betraying the Biafran cause. The same week at Ekwulobia, an IPOB leader told me that he will murder the two lawyers if he finds them in a dangerous place because they were given billions by the DSS and Buhari to suspend the Sit-at-Home order.

Therefore when some Archbishops,Bishops , Venerables and Apostles summoned me again over the same issue, it was both puzzling and embarrassing.

As an Igbo activist of over twenty five years who bore the brunt of Babangida and Abacha dictatorship with some levels of incarceration and assassination atempts on account of bad governance, June 12 and others rights infringements from my days as students union leader till when the Obasanjo do or die election and malfeasance was creating crisis for Ndigbo, I am in a position to know when a rumour is true or false.

As an veteran Igbo activist, I witnessed severally how Ndigbo shot themselves in the foot, from the betrayal of Alex Ekwueme at Jos Convention of 1998, with the connivance of Babangida, Abubakar Rimi and Jim Nwobodo to another betrayal of Ekwueme at Eagle Square PDP Convention of 2002 by Atiku and Igbo Governors, even when former Governors James Ibori, Diepreze Alameseigha and Akpan rallied support for the Ekwuluobia born former Vice President.

As a veteran activist I witnessed the manner Obasanjo used Igbo leaders to remove Chuba Okadigbo as Senate President under guise of Sallah Ram and Furniture Allowance, and Igbos had three Senate Presidents in four years. Therefore, the theory of marginalization of Ndigbo as espoused by IPOB is very much one sided, devoid of factual arguments, and filled with propagandist vituperation.

Therefore, I am not moved by the IPOB arguments that Buhari and the Fulanis are the only problems of Ndigbo. I have openly cautioned IPOB about some unfounded hate speeches since 2015 capable of affecting the greater fortunes of Ndigbo.

I told the Bishops that I am not a fan of the Monday Sit-at-Home order nor a supporter of the continued detention of Nnamdi Kanu. I recall that two weeks before his arrest on June 9th, I warned in a piece titled ‘Assassination Plot: Buhari, Nnamdi Kanu, Vaccinist, Unknown Politicians.' I warned Nnamdi Kanu publicly that there is a plot to assassinate him before October 1st, 2021, and it is very unfortunate that he never took the warning seriously, and made himself vulnerable for arrest. However, my consolation is that the forces that wanted him assassinated heeded my public warnings that it will bring bloodshed to Nigeria, and instead opted for his arrest.

I gave the warnings concerning plot to assassinate Kanu on June 9th, and 75 Northern Groups placed a bounty of N100 million naira on his head, eight days later on June 17th, and he was arrested on June 27th, eighteen days after my warnings.

I cited reliable diplomatic sources for my information. I even informed some Igbo leaders, and asked them to initiate dialogue with certain groups in the north to avoid the embarrassment of Kanu, but they put off my suggestion, and pleaded that we shelve the moves till after the Anambra Party Primaries. By the time the primaries were over, with Andy Uba, Ifeanyi Uba, Soludo, Ozigbo, as winners, the Supreme Commander of IPOB was bundled back to Nigeria. Therefore, the followers of Nnamdi Kanu have not done more for his safety than me. I have also gotten involved in concert with some igbo clerics and activists in the release of some innocent Igbo Youth dubbed IPOB from detention, at personal cost and time, since 2015. Therefore followers of Nnamdi Kanu have not done more for IPOB than myself. However, I have cautioned IPOB severally that the culture of lies, abuse and propagandist malfeasance is alien to Igbo culture.

I protested at why I was summoned to verify a bribery story as if I work with EFCC, Nigeria's anti-graft body. I was promptly reminded in all these meetings of the catalogues of my whistleblowing which had turned out to be true especially concerning MASSOB, Ohanaeze Ndigbo and all the Igbo leaders who have sabotaged our destinies for a mess of porridge, especially when billions of naira is quoted.

In that respect, I agreed with the clerics because in 2011 I raised an alarm that Igbo Presidency have been sold by Ohanaeze Ndigbo under Ambassador Uwechue after a presidential gift of N5 Billion Naira. I explained it in the piece titled,'Ohanaeze Crisis and the Auctioning of Igbo Presidencncy Parts 1,2' and a follow up in 2013 titled ' Igbo Presidency Shamelessly Sold for N5 Billion naira'. Where I variously argued that the collection of N5 billion naira by Ohanaeze to sell Igbo Presidency to Jonathan is a time bomb.

Coincidentally, former Vice President Alex Ekwueme echoed the same views that jettisoning zoning for pecuniary gains by Igbo leaders is going to affect Ndigbo in the future and he was embarrassed at Concorde Hotel Owerri.

In 2014 and 2015 I raised another alarm after Ohanaeze leaders collected N1.2 billion naira and N5 Billion Naira to give Jonathan a second term endorsement. In a piece titled ‘Jonathan’s N5 billion naira gift tears Ohanaeze to pieces’ I condemned the cash for an endorsement deal and condemned also Ohanaeze for throwing Buhari’s letter to Ndigbo into the waste bin.

The sharing of part of the N5 billion naira at Ohanaeze Secretariat Park Avenue in February 2015 was so acrimonious that the Chairman of Ohanaeze Elders Council, Chief Mbazulike Amechi summoned me for a press rebuttal. The then President of Ohanaeze Youth Council was given a paltry N2 million naira for the entire Youth body, while the immediate past spokesman of Ohanaeze Ndigbo was given only N700,000 for the popular organs. The Coordinator of Igbo Mandate Congress IMC in the United States and Canada and Composer of Biafran Anthem, Chief Charles Okereke, got his own share of the national cake retrieved back to a special cupboard in the admin office for condemning the bribery scandal..

However, I told the concerned clerics that I have no information that neither the DSS nor the Presidency mobilized any such sum for Barrister Ejimakor, Ejiofor, Powerful or leaders of the IPOB high command. I however expressed that I know that the Presidency had asked Igbo Governors, Cabinet Ministers and Public Office Holders to dialogue and to settle the IPOB boys from their security votes, and I know that some local chapters have been mobilized.

I told the clerics that Nnamdi Kanu had personally requested to get the Sit-at-Home suspended to give room for a political solution, and that the two lawyers communicated the instructions to IPOB decision makers but it was initially viewed with suspicions. I told them that the Nnamdi Kanu’s family has reasons to seek political solutions because the Biafran struggle is about to take the head of the firstborn son of the family, after both parents died recently and that the burden is too much for the family.

Secondly, it is obvious that the much-touted intervention of the British establishment is more of propaganda than reality, and lastly, the manner Kanu was abducted and bundled back to Nigeria suggests that his traducers are capable of more dangerous escapades. Therefore, under such circumstances, calling off the Sit-at -Home for a proper political settlement, is not out of place, and therefore, the accusations of bribery are unfounded. Even if any money exchanged hands, it is an afterthought, not a premeditated attempt to betray the struggle.

I cautioned the clerics not to follow the examples of IPOB whose penchant for misinformation is legendary and thanked them for seeking clarifications from me. The N5 billion naira betrayal of Nnamdi Kanu by his lawyers and IPOB leaders is a fabrication from disgruntled elements within IPOB. My fact checks have proved it a lie and those peddling the rumors are as many saboteurs as those believing it.

Take me to court, I will get the court to also overturn the ...
49 minutes ago

We’ve revamped TVET education in Ghana than any government –...
49 minutes ago