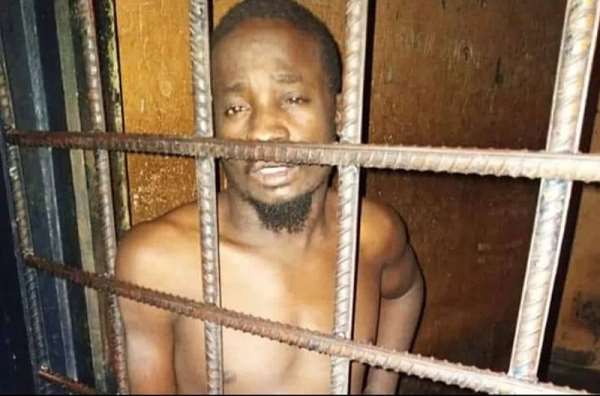 Abor Police in the Volta Region have re-arrested a convicted criminal, Alpha Junior Kenedu who escaped from police custody with a hacksaw allegedly smuggled into the cells by his wife.

The cell break is reported to have happened on Sunday morning at around 3:30 am when the 31-year-old convict cut off metals at the ventilation area of the cells and escaped.

Junior Kenedu who was convicted and sentenced to a jail term of 3years by the Circuit Court in Keta on August 16, 2021, was waiting for his Covid-19 test result for him to be conveyed to the Ho Central Prison.

However, on Sunday dawn September 19, 2021, the convict broke the cells and escaped.

Preliminary Police investigations reveal the convict used a hacksaw suspected to have been smuggled into the cells through the window by his wife whose name was only mentioned as Abla.

He reportedly damaged the metal frames in the window of the cell thereby aiding his husband to escape from the cells.

The District commander organized a search party and through that, the said convict was arrested in his hideout at Wute near Tadzewu in the Volta Region.

However, his wife Abla is at large.