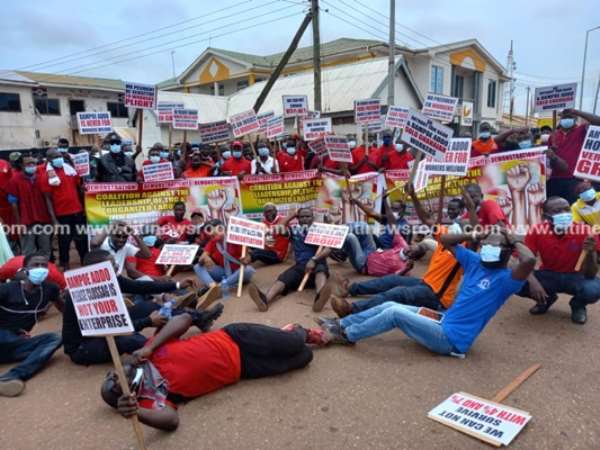 Executive Secretary for the Coalition, Azubila Salam Emmanuel in an interview on Eyewitness News said they believe that the TUC, led by Dr. Anthony Yaw Baah and the Civil and Local Government Staff Association, Ghana (CLOGSAG) led by Isaac Bampoe Addo failed to take into account the rising cost of living in the country before agreeing with the government on their salaries.

“Our leaders, Dr. Yaw Baah and Bampoe Addo of CLOGSAG who were signatories to the 4% salary increase for 2021 and 7% of 2022 without knowing the financial projections of next year yet went ahead to accept that percentage are sell-outs. They sold out Ghanaian public sector workers and this is the reason why all government workers across all sectors came together to demonstrate massively in Tamale,” he said.

Leaders of organized labour in July 2021 announced a base pay rise agreed with government for public sector workers including teachers, health workers and civil servants.

Among other justifications, the TUC said the percentage increase in salaries was accepted on condition that there will be no public sector redundancies or employment freeze.

But according to Azubila Salam Emmanuel, the justifications of the TUC leadership for accepting the salary increment are untenable.

“All the reasons they are giving doesn't tally and doesn't make sense to anybody who wants to scrutinize the reasons for accepting the 4%. Everything is clear that these people went to negotiate for their own pocket and not for the majority of workers who are contributing union fees to them every month. They negotiated for this even without consulting their own union at the regional level not to even talk about the district level… We don't see them as democratic leaders who are running our union,” he added.

The group’s demonstration in Tamale on Tuesday attracted hundreds of government workers across all sectors.