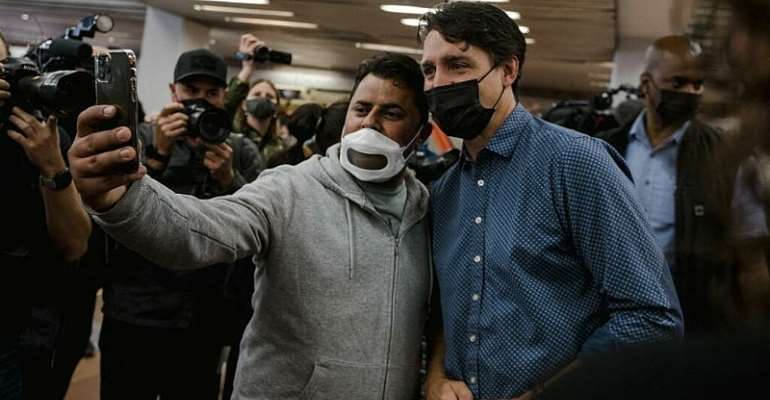 Canadian prime minister Justin Trudeau posed for selfies and bumped elbows with supporters in a Montreal subway station early Tuesday, hours after he narrowly won a third term, after five weeks of campaigning.

"It is I who thank you," Trudeau told a cheering crowd of commuters, who surrounded the prime minister on their way to work and school.

Clad in jeans, sneakers, a blue shirt and wearing a black face mask, Trudeau mingled with his constituents in a subway corridor between two escalators, slipping a few words in French to some and in English to others.

"I come from Afghanistan and I am really proud to have been welcomed in your country," a woman in a pink and grey sweater told Trudeau, putting her hand to her heart in a gesture of gratitude.

Soon after, another young woman approached Trudeau and called out to him, "I am counting on you to act for the sake of the environment!"

Greeting constituents in the metro after election day has become a tradition for Trudeau, something he did after his first victory in 2015 and then in 2019.

"I am very happy with the way he managed Covid," said Giugetta Iovino. She added that she is "happy to know that it is he who will get us out of there."

But Omar Bencheikh, a 24-year-old immigrant from Morocco, is disappointed and believes the new government won't last more than two years. "For me, the Liberals have not succeeded in their bet because Canada is divided," he said.

In his victory speech Monday night, Trudeau promised to lead Canadians "into the brighter days ahead."

While thanking his supporters, he also vowed to work for all Canadians.

"Because no matter how you voted ... I hear you, I hear you when you say we can only move forward if no one is left behind," he said.

Trudeau called the snap polls last month, hoping to parlay a smooth Covid-19 vaccine rollout -- among the best in the world -- into a new mandate to steer the nation's pandemic exit and pass his agenda without opposition support.

After five weeks of campaigning, Trudeau was able to cling on to power -- but emerged weakened.

The Liberals have won or were leading in 158 seats, far short of the 170 needed for a majority, while the opposition Conservatives were heading for 119, according to preliminary results from Elections Canada, with the new parliament set to look little different to the outgoing one.