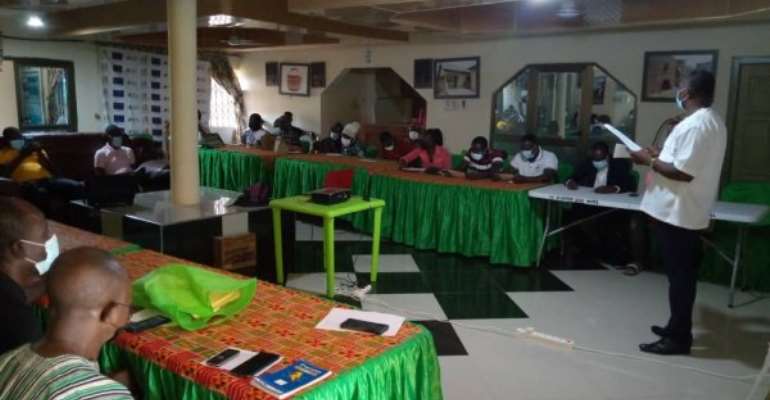 The National Commission for Civic Education (NCCE) has called on the security services in Ghana especially the Ghana Police Service to protect the identity of informants to effectively combat crime and maintain peace.

It said when the identities, images and reputation of people who volunteered information to the security agencies were protected and upheld, the citizens would be willing to provide relevant information that would help clamp down nefarious activities in the country.

Mr Robert Dampare, the Kassena-Nankana West District Director of the Commission, made the call at a youth engagement forum at Paga in the Upper East Region, organized by the Commission.

He said security was a shared responsibility and urged the Police Service to be professional in their dealings to allow the public to assist them to combat crime.

The engagement dubbed, “Preventing Electoral Violence and Providing Security to the Northern Border Regions of Ghana (NORPREVSEC)” and sponsored by the European Union (EU), sought to create awareness among the youth to enable them identify early warning signals of violence extremism and radicalism.

The goal of the project is to provide the youth with the necessary information on violent extremism and terrorism to empower them to resist being recruited into violent extremists' groups to cause destruction to human lives and destabilize the country.

It would also help to fight transnational organized crimes and prevent the likelihood of democratic relapse as a result of tension.

The District Director indicated that the Ghana Police Service and other security agencies needed to restore public trust in the service and be fair and just in their dealing with the citizenry.

“Many are not ready to report cases because of bring prove or evidence, coupled with the fear of exposing their identities to criminals thereby putting their lives in danger.

It is therefore my fervent call on the security agencies to safeguard informants' identity and try erasing the fear from civilians that they often use uniform to bully civilians unfairly and or extorting money from the people, making them unwilling to volunteer information to aid them to prevent crime, keep the peace, law and order in the country,” Mr Dampare added.

Mr Christopher Adogmah, the Upper East Regional Internal Auditor of the NCCE, noted that the country belonged to the youth and it was imperative for them to cultivate the spirit of nationalism and patriotism and work towards maintaining the prevailing peace for accelerated development.

He said security concerns in the neighbouring countries was a worrying phenomenon for Ghana and urged the youth to resist every temptation to be recruited to cause mayhem and destabilize the country.

Mr Adogmah admonished Ghanaians to endeavour to imbibe in themselves the spirit of tolerance as it was key to preserving the peace and development of the country.

Reverend Father Ebenezer Atongdem, the Assistant Parish Priest of the St. Theresa of the Child Jesus Parish, Paga, noted that to achieve peace, there was the need for sustained efforts from all people and respect for human lives and dignity.