How conflict has made COVID-19 a neglected epidemic in Ethiopia

By Fisaha Tesfay - The Conversation 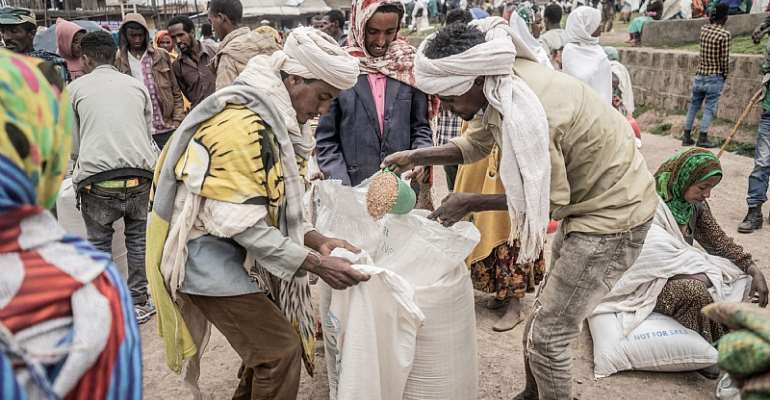 People who fled the war in Tigray gather around in a temporarily built internally displaced people. - Source: Amanuel Sileshi/AFP via Getty Images

The number of COVID-19 cases in Ethiopia has been increasing . The delta variant has been identified recently in the country, but officials are still investigating if it is driving the resurgence.

Initially, the government's response was effective. Containment measures were put in place. These included restrictions on social gatherings, face masks and physical distancing were mandatory. People were compliant at first. But as time went on, the restrictions were hardly enforced by the government or followed by the general public.

In addition, the country's target to vaccinate 20% of its eligible population by the end of 2021 is unlikely to be achieved. To do this it would need over 35 million doses. But it only has under 4 million doses – just 11% of the needed vaccine doses.

There are several reasons it can't meet its target. The Ethiopian government can't buy vaccines because of the economic crisis. And vaccine pledges from donor countries aren't enough.

The situation is aggravated by the multiple conflicts in regional states such as Oromia or the full-fledged war in Tigray. War displaces populations, destroys health system infrastructure, interrupts health service delivery and diverts the attention of political leadership. It takes scarce resources away from basic services and leads to the collapse of the public health system , causing a domino effect.

We would thus say the issue of COVID-19 is less of a priority for the millions of Ethiopians caught up in conflict.

Currently, much of the government and public attention in Ethiopia is not on COVID-19 but on the 10-month-old war raging in Tigray .

This war was limited to Tigray for the first eight months, from November 2020 to June 2021. But it has started to spread to other parts of the country, namely the neighbouring regions of Afar and Amhara where about 300,000 people have been displaced and need emergency food aid.

The conflict has crippled the Ethiopian economy through its high human and material cost and through the withdrawal of financial support from donor and lending countries. Up to 50% to 60% of Ethiopia's national budget came from donor countries.

Furthermore, up to 5.2 million people (90% of the population) from the Tigray region need emergency food aid and 400,000 face famine conditions. Around 70,000 have been displaced to neighbouring Sudan and two million people are internally displaced.

The Ethiopian government is accused of blocking aid to Tigray in addition to the cut-off of telecommunications, banking, electricity, commercial supply and other basic services for the last 11 months. Hence, there is no way for people or the Tigrayan government to prioritise COVID-19 related activities, including vaccination.

Read more: Following the Tigray conflict, the rocky road to peace in Ethiopia

There are serious conflicts and instabilities in other parts of Ethiopia too. These include Oromia, Benshangul Gumuz, Amhara, Afar and Somali regions. These undermine daily life, health, and social and economic wellbeing.

Ethiopia has allocated 3 billion Ethiopian Birr (US$328 million) for vaccines and related expenses , which is 25.4% of the needed budget but the rest relies on donations from high income countries.

So far Ethiopia has received 2.2 million doses of AstraZeneca from COVAX via the GAVI alliance, 453,600 doses of the Johnson & Johnson COVID-19 vaccine from the US, 300,000 COVID-19 Sinopharm vaccine doses from China, 108,000 Johnson & Johnson COVID-19 vaccine doses from the African Vaccine Acquisition Trust (AVAT) mechanism and 271,000 dose of AstraZeneca from the German government. The UK, and other countries have also pledged to send vaccine donations to African countries including Ethiopia .

The emergency response mainly relied on the country's primary public health-care infrastructure which has been in existence for two decades and is prevention-based. This is primarily constituted of the health extension program and other approaches, such as community mobilisation and public awareness campaigns.

There are many challenges facing the Ethiopian health system, like others in Africa, when responding to the COVID-19 epidemic. These include limited resources, less prepared and weakening health systems, limited supply of ventilators, electricity and oxygen, poverty and overcrowding which increases the vulnerability of some segments of the population . In addition, while more than [78.3%](https://tradingeconomics.com/ethiopia/rural-population-percent-of-total-population-wb-data.html#:~:text=Rural%20population%20(%25%20of%20total,compiled%20from%20officially%20recognized%20sources.) of the Ethiopian population lives in rural areas, most campaign and prevention activities tend to focus on urban areas .

But the biggest challenge in responding to the epidemic is the war in Tigray and insecurity in other parts of the country. Conflict has made COVID-19 prevention and vaccination efforts impossible in many areas.

It is important to address the drivers of the civil war and insecurity in the country so that the country can focus on fighting the pandemic.

In addition to this, it's crucial that Ethiopia involves religious leaders for vaccination drives in rural areas where most, [78.3%](https://tradingeconomics.com/ethiopia/rural-population-percent-of-total-population-wb-data.html#:~:text=Rural%20population%20(%25%20of%20total,compiled%20from%20officially%20recognized%20sources.) of the Ethiopian population, lives.

Dr Fisaha Haile Tesfay is a postdoctoral research fellow, at the Institute for Health Transformation, Deakin University Australia, the views expressed in this piece are only the author's, not necessarily the funder

Dr Hailay Abrha Gesesew is a principal investigator in a project sponsored by an Australian National Health and Medical research Council (NHMRC). The views expressed in this opinion piece are only the author's, not necessarily the funder.