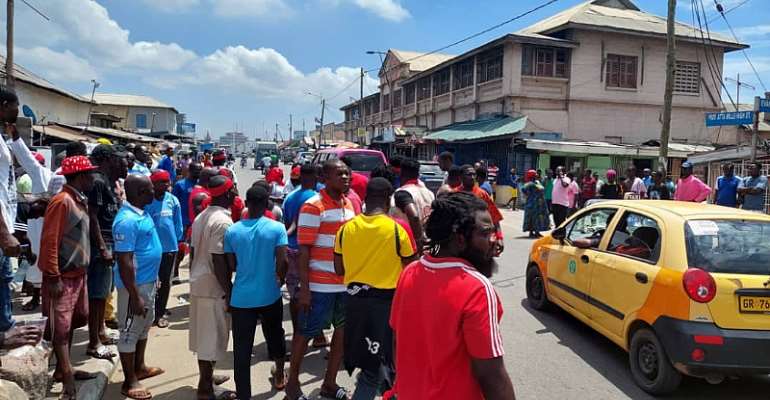 The spontaneous disturbances that have characterised pronouncements of Metropolitan, Municipal and District Chief Executives (MMDCEs) in parts of the country, are absent in the Sunyani and Sunyani West Municipalities.

There is relative calm in the two municipalities, as the majority of the supporters of the New Patriotic Party (NPP) in the constituencies endorsed the President’s nominees.

President Nana Addo Dankwa Akufo-Addo at the weekend announced the appointment of the 260 MMDCEs comprising 222 males and 38 females.

Since then, there had been reported incidents of violence in parts of the country, because some aggrieved supporters of the NPP believed the president’s choice of nominees could not meet their expectations.

In a random in Sunyani on Monday, some NPP supporters explained the President owed no one explanation because he had the prerogative to appoint his choice of MMDCEs after the candidates were approved by the party and went through the vetting process successfully.

“The president's choice is our choice. I believe the president considered several factors before he made the appointments, and he even had the prerogative to do so”, Mr Yaw Dabie Appiah Mensah, the leading member of the NPP in the Bono Region said.

Mr Mensah, a former Regional Organiser of the party in the then Brong-Ahafo Region explained “we don’t have any choice other than the president choice and if we want to win the 2024 elections, then we must bury our differences and support the President”.

He therefore called on the various Assembly Members in the country to avoid unnecessary delays and confirmed the president nominees to enable them to continue with the government laudable social intervention programmes aimed at job creation and poverty reduction.

“Our vision is to sell the achievements of the government to the good people of Ghana so that they would be well informed and make good decisions when they go to the ballot in election 2024. If we truly love the NPP and Ghana, then we must toe in line with the president and support his government to achieve his vision for the nation”, Mr Mensah added.

He condemned the reported disturbances and incidents of violence so far, and appealed to disgruntled supporters of the NPP to remain calm, have trust and confidence in the president’s nominees, and support them.

“Election 2024 is very close and we don’t have ample time for unnecessary disputes. We are all NPP loyal members and nobody is very loyal than the President. The president would be unhappy to see the party go into opposition in the next general election and that is why we must all support him for the party to break the eight year jinx”.

“We have achieved a lot and we must be careful in our actions and inactions in order not to provide an opportunity for our political opponents to make our great party unpopular in the eyes of Ghanaians. Our opponents are watching us and we must be guarded”, Mr Mensah stated.

Mr Frank Adjapong, a senior member of the NPP in the region also appealed to the Assembly Members to confirm the president nominees in the supreme interest of the party and the nation.

He said development had stalled for a while in the Sunyani and Sunyani West Municipalities because of the delays in the appointments of the chief executives, saying “now that the president had released the list of nominees we must all support so that they would be confirmed for development to resume”.

Eric Kwame Tabiri, the Convener and Founder of the ‘Concerned NPP Supporters in Bono Region”, an emerging youth wing of the NPP, said the level of political maturity and civility exhibited by the NPP supporters in the Sunyani East and Sunyani West constituencies was highly commendable.

He commended Madam Justina Owusu Banahane, the Bono Regional Minister and Mr Kwame Baffoe, the Bono Regional Chairman for the roles they played towards the nominations of two chief executives, saying the calm in the areas was an indication that majority of the people endorsed the President nominees.