Unemployment is at its lowest in 30years 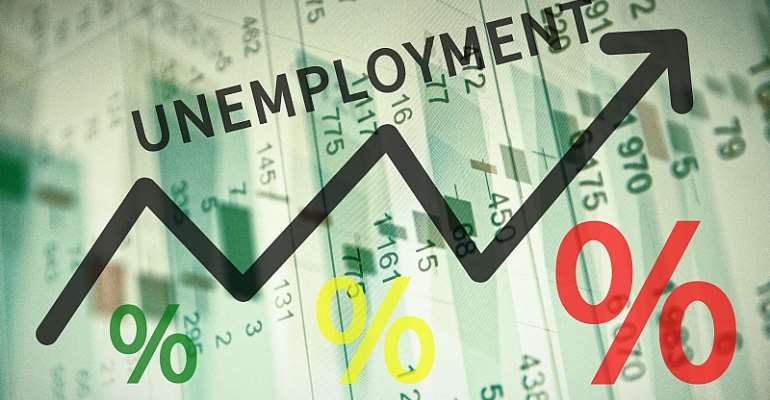 The unemployment rate refers to the percentage of the labour force of a country that are without jobs but are available to work and actively seeking employment. Unemployment has wide ranging repercussions that leave no one indifferent in any country. It is thus no wonder that unemployment tends to occupy a wide space in the political discourse in Ghana.

The media is awash with daily discussions on unemployment issues, particularly, youth joblessness. The political parties, the NPP and NDC in particular, have always traded accusations and counter-accusations about which government has performed better or worse than the other in the past.

But how do the available pieces of statistical evidence speak to these categorical statements that are often made by journalists, social commentators and politicians? According to the ILO the unemployment rate, as captured by economics trading.com, has averaged 6.17% in the last 30 years in the fourth republic and currently stands at about 4.53% in 2020.

Comparatively the latest statistical evidence of 4.12% unemployment rate for 2019 thus makes it the lowest unemployment rate ever recorded in the last 30 years in Ghana. Even at its current level of 4.53% (2020) the unemployment numbers appear not only to have fallen in relative terms but also in absolute terms from 1.11 million in 2015 to about 837,145 in 2020.

This is indeed a significant achievement, which must not be lost on Ghanaians in the socio political discussion of unemployment, more so on account of the apparent negative impact of COVID-19 on the economy of Ghana. Against this backdrop, it would be intellectually disingenuous to conduct discussions about the unemployment situation in Ghana as if it has deteriorated under the current government.

Notwithstanding this achievement of the current government, it must be recognised that the current unemployment rate is still relatively high, given that the rate seems to have risen from 2.8% in 1984 to its current levels. It also compares unfavourably to 3.5% of Cote d'Ivoire, 2.98% of Kenya, 2.78% of Ethiopia, 3.3% of Liberia, but favourably to the 10.43% (6.28%) average for Africa (South Sahara Africa) in 2020.

To many people, the reported rate in Ghana seems too low and counterintuitive, given the widespread concern about unemployment as the number one development challenge of the country. Belonging to the worst affected groups of unemployed Ghanaians include women, the disabled and the elderly. The situation, however, remains more precarious for the youth between 15-24 years, even though available statistical evidence shows successive declines from its peak level of 14.17% in 2015 to 8.72% in 2019. According to the World Bank, given the country’s youth population, projected to grow by about 2.2% annually over the next decade, the country would need to generate about 300,000 new jobs each year for the unemployed young people. The inability of the economy to generate enough jobs to meet that requirement lends credence to the threat that the high youth unemployment poses to the country’s security.

What equally deserves serious attention is the estimated 28% of the total active population (15-64) of Ghana who do not receive earnings of any kind, whether as wage payment or as compensation in self-employment, and who could be considered as unemployed. This problem also seems to be compounded by the high proportion of Ghanaians who are underemployed (50% of total labour force), poorly paid, have vulnerable jobs, and with many lacking access to any form of social security. The proportion of Ghanaians without employment even increases to 47.2% if we consider only paid employment.

The unemployment challenge does not only have economic costs in terms of wasted economic resources and lost economic growth for the country. It also harbours immense social costs, associated with alienation and frustration of the unemployed, increasing poverty levels, crime, drug abuse, teenage pregnancy and prostitution, ethnic and civil conflicts over available scarce resources, regional disparities and rural-to-urban migration, as well as social pressures in the country.

These are indeed costs to the society, which make it imperative on governments, policy makers, legislators, industrialists and all others to ensure that the current relatively high economic growth translates into increasing job creation.

Addressing the unemployment challenge, however, requires coherent and coordinated growth and employment strategies and the necessary political commitment to implement and monitor employment targets agreed upon in the nation’s development policy frameworks.

‘You can’t beat NDC in spreading lies, falsehood and propaga...
41 minutes ago