For Malawi’s ex-miners, the 33-year wait for their South African wages continues

By Benson Kunchezera in Malawi - RFI 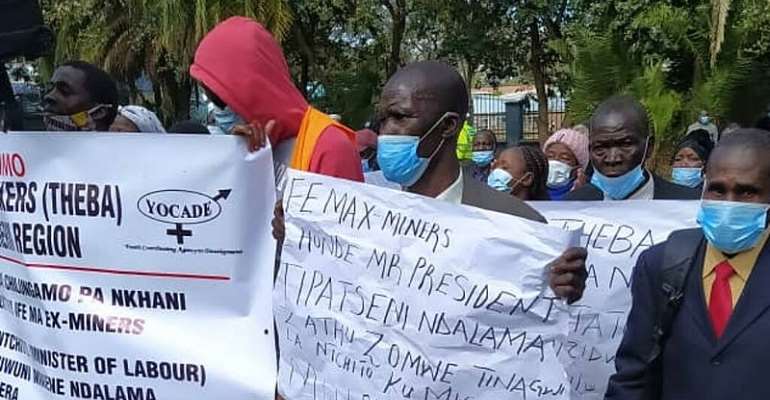 It has been 33 years since a group of Malawian workers returned from their mining jobs in South Africa - and they're still waiting to be paid.

“We are in dire poverty, we failed to educate our children, and now we are old,” John Mizati, Chairperson of the former Chisomo mine workers, told RFI.

Malawians flocked to apartheid South Africa between the 1960s and '80s in search of greener pastures and worked in the mines under the Temporary Employment Bureau of Africa (TEBA). This was done under a bilateral agreement with the South African and Malawian governments.

In March 1988, the Malawian government withdrew from TEBA because Malawian citizens were discriminated against -- South African employers claimed they were spreading HIV and AIDS in South Africa.

Protesting for their pay

On a chilly day last month in Malawi's commercial hub, Blantyre, a number of the aged ex-miners from the southern region took to the streets, demanding their back wages.

The protesters, many obviously over 60, gathered at Kamuzu Upper Stadium, putting their lives at risk during Covid-19's third wave in Malawi.

They marched to Blantyre City Council to deliver a petition while singing songs and carrying placards that read, “Enough is enough! Give us our money back.”

The aged ex-miners took to the streets for those who couldn't march, some of them former miners who were maimed as a result of their work in South Africa.

“Some were amputated, some had both their hands and legs cut off while on duty in South African mines,” said Mizati.

They vowed to continue protesting until they got their money, said Mizati, adding that the Malawian government should investigate where their money went. They are hoping to meet Malawi President Lazarus Chakwera, to ask for his help.

“We understand the previous regimes failed to give us our benefits,” said Mizati.

This is not the first protest held by former miners - they took to the streets during previous administrations, too.

During his presidential campaign in 2020, Chakwera vowed to resolve the issue of their missing wages.

“He should also investigate previous presidents on how they handled our money,” added Mizati.

At Chazunda market, some 45km from Blantyre, RFI spoke to another person impacted by the missing wages.

Life has been hard for Odeta Donasiyano, 58, a widow, whose husband was one of the Malawian miners who was never paid. Although not a part of the march, she agreed with the sentiments of Mizati and the miners.

"We would like the government to give us our money. I have intelligent children but they dropped out of school because I failed to pay their school fees,” said the mother of seven. She was en route to visit her youngest son, Emmanuel, at boarding school.

While her husband was away in South Africa, she was unable to pay school fees, as well as to shelter and accommodate her children. Her only income is from her smallholder farm.

“My other six children gave up on school and they ended up putting their effort into other things like doing business and farming,” she said.

Donasiyano said that her children didn't go to university even though they were selected. And now, her youngest son will have to drop out of secondary school because of the lack of money.

She said she was one of the few women in the group who went to South Africa demanding benefits in 2019.

The South African government is complicit in this lost pay issue, according to the former miners.

The South Africa Chamber of Mines, now called the South Africa Minerals Council, hired Alexander Forbes, South Africa's biggest pension funds administrator to take care of the disbursement of the funds to all beneficiaries on the income from mining companies. But a large number of Malawi miner have yet to receive anything.

Trying to understand the delay

According to Labour deputy minister Vera Kamtukule, 81 ex-miners will be paid by Malawi's Provident Fund directly into their bank accounts through electronic money transfer.

“The Malawi government will have no role to play in paying the beneficiaries,” said Kamtukule.

The Malawian government disclosed that supporting documents from beneficiaries or relatives of the deceased miners are needed to complete the process.

Following the claims is difficult for both the Malawian and South African governments, George Phiri, political science lecturer at the University of Livingstonia in Ekwendeni, said.

Phiri faulted the weak regional framework and complicated dealings with the South African apartheid government for delaying the process over the past 33 years.

He said Malawi had not seriously implemented domestic or international labour laws. The laws at the time dealt only with civil servants within Malawi. There was no precedent for Malawians working outside the country.

The Malawian government is to blame for poor record keeping which has made it hard to follow up on pensions for the miners. To make matters worse, the miners struggled to inform the government what happened, he said.

“Literacy levels were so low; most people who went to work in the mines of South Africa were illiterate,” he said. This further complicates the claims because many have no record or any paperwork of their employment.

Former Chisomo mine workers told Africa Calling podcast that more than 50,000 ex-mine workers have not been compensated.

Africa Calling reached out to government officials, who declined to be interviewed, but Malawi's labour secretary, Dickson Chunga, issued a statement.

The Labour Ministry pointed to the Mines 1970 Unclaimed Benefits Preservation Provident Fund, which has verified the existance of 475 Malawian ex-miners. It said they are currently awaiting supporting documents.

The statement said that 143 ex-miners have been traced, of which 81 have provided full supporting documentation. Their files have since been submitted to the Provident Fund authorities in South Africa and those miners are waiting to be paid.

The number of workers who haven't been compensated remains vast — some 50,000 ex-miners are without pay, the Chisomo group told Africa Calling podcast.

The Labour Ministry earlier this year said that the Malawi government approached the South African government for the first time to intervene on the matter, in order to speed up the process and said it is in constant contact with the Provident Fund Administrators.

The fight will continue

Malawi's Human Rights Defenders Coalition (HRDC) recently joined the ex-miners protest, in order to help them in their campaign for back-pay

Hendreson Mhango, HRDC Vice Chairperson in the southern region, said they have been following this issue.

"We have been following up this issue since last year, and we have done some research in the southern region and eastern region. We thought it wise to help them delivering their petition because they are facing Human rights abuses," said Mhango.

The Labour Ministry stressed that Covid-19 restrictions in South Africa have greatly slowed the processing of claims due to the restrictions imposed to curb the pandemic. It dismissed reports that the Malawi government has received money intended for ex-miners.