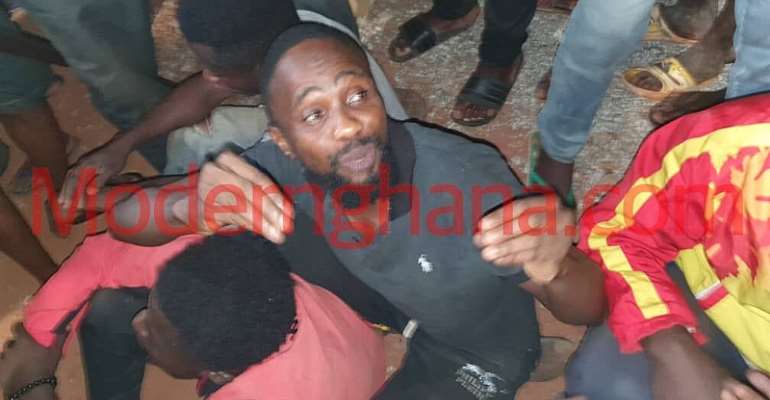 The timely intervention of Bekwai Police saved some four suspected rail line thieves from being lynched by some angry youth of Bekwai.

The four, according to information gathered by ModernGhana News had gone to the Pampaso and Kensere communities around 2am on Tuesday to cut the railway lines and cart them in a heavy-duty truck.

Eyewitnesses say their cover was blown by someone who saw them at the railway site and quickly relayed the information to the youth of the two towns. The youth within a short time massed up and subsequently arrest them.

“They are fond of cutting the rail line metals but and they have always succeeded because you cannot catch them if you are alone. They are always armed and will kill you if you dare question their action,” the eyewitness told ModernGhana News.

Assembly Member of Kensere, Emmanuel Anim Okyere said they were fortunate in their strategy since most of the suspects embarked on their operation armed. “We were very careful not to let them see us first because they are always armed.”

He added that but for the timely intervention of the police, the irate youth would have lynched the four suspects.

“These people are nation wreckers and need not be entertained. Look at the huge amount the nation is spending on these railway lines, then you come and cut them and sell to scrub dealers, why,” he stressed.

The four have been detained by the Bekwai Police for further investigation.

Latest Photo Reports
Catch up with all the political quotes from our politicians.
Advertise here
More Headlines
ModernGhana Links
I'm sorry, was running away from a prophecy that I'll be shot on October 18 – Shatta Wale apologises for faking gun attack
Police comb for Shatta Wale after reportedly shot
We Will Not Allow Anyone To Cheat Us In 2024 Elections — Mahama
Assemblies of God supports anti-LGBTQI+ Bill in a memo to Parliament
31.2km Assin Praso Assin Fosu road to be completed in November 2023
Your head should be properly examined if you think we'll sit down to be brutalised, murdered in 2024 elections again – Elvis Afriyie-Ankrah
Cape Coast Airport will be constructed at all cost - Akufo-Addo
‘We won but soldiers forced EC to declare results in NPP’s favour’ – Mahama
Komenda factory: "Mahama constructed the roof before building the foundation" - Akufo-Addo
TOP STORIES

Akufo-Addo, Paul Kigame, others to address YouthConnekt Afri...
19 minutes ago

I'm sorry, was running away from a prophecy that I'll be sho...
19 minutes ago