Silent for once, Salah Abdeslam watches his brother, Brahim, blow himself up 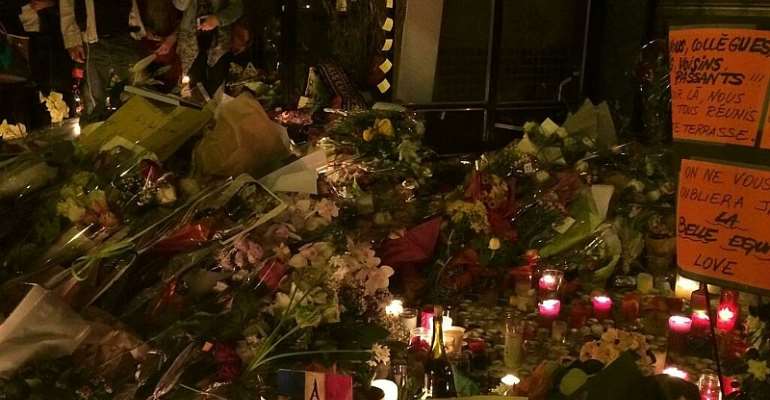 On Monday, at the start of the third week of the Paris November 2015 terror trial, two police experts described the scenes at La Belle Équipe bar, where 21 people died in a hail of bullets, and at the Comptoir Voltaire, where suicide bomber Brahim Abdeslam killed himself, injuring a dozen people, three of them seriously.

This was Salah Abdeslam's most remarkable performance so far.

Those attending the Paris attacks trial have become accustomed to Abdeslam's interruptions, his insistence that the Paris murder squads, of which he is the sole surviving member, were justifiably motivated by a desire to avenge the families of Islamic State fighters killed by French air force jets in Syria.

He did it again on Monday.
At the end of nearly two hours of harrowing testimony from the police officer who coordinated the collection of evidence at the Belle Équipe bar, Abdeslam asked to be allowed to speak.

"You have to put the Paris attacks in context. Without that context, the attacks are unforgivable," he told the court. "French bombs killed an uncountable number of people in Syria. That made 13 November 2015 inevitable. But dialogue is always possible."

At which point the normally imperturbable court president, Jean-Louis Périès, lost his temper. "You can't call the cold-blooded murder of innocent people a form of dialogue!" he fumed.

"But what about the innocent people in Syria?" Abdeslam insisted. The president said that the court, indeed, intended to examine the Syrian question at a later date, before telling Salah Abdeslam to be quiet.

With the observation that "those people you call terrorists were my brothers," Abdeslam sat down.

A short while later, the court watched a video recording of Abdeslam's biological brother, Brahim, walking into the Comptoir Voltaire bar, choosing the most crowded section of the covered terrace, and activating his explosive vest.

The suicide bomber simply vanishes from the images, leaving a waitress on the ground, and one client apparently unconscious where he sits, stunned by the explosion and the shower of steel bolts unleashed by the blast. The other people present, variously injured, struggle towards the exit.

Mercifully for the survivors, only the back section of the explosive device detonated.

Salah Abdeslam watched the short video of his brother's last moments. He sat back in his corner of the high-security glass dock, withdrawn from the 10 other prisoners. He did not ask to speak.

The day's evidence involved one other video recording, 28 seconds showing two of the three killers leaving their car outside the Belle Équipe bar and firing dozens of times at those on the terrace.

After a sequence of single shots, one or both of the weapons is switched to automatic mode, and the firing continues, an eternity of appalling violence.

What was left was a police drawing in pastel shades, various human outlines labeled from A to M, showing where the victims fell. Each letter was identified in court . . . name, age and principal wounds. If there was any consolation for the families, it's that death, in most cases, would appear to have been instantaneous.

There were six others, badly injured, moved to a first aid position established in a nearby restaurant. By the time the police investigation teams began their work, those six had been laid under covers on the footpath. More names, ages and injuries.

Two other victims died in hospital.
The police found 164 bullet casings and believe that the attack lasted between one and two minutes.

At the Comptoir Voltaire, a retired nurse arrived at the scene of what she believed to have been a gas explosion. Aided by another passer-by, he attempted to revive Brahim Abdeslam by administering cardiac massage. When the wires leading to the unexploded part of the attacker's suicide vest became visible, efforts at resuscitation were halted.

There will be no hearing on Tuesday, because a police witness is unavailable.