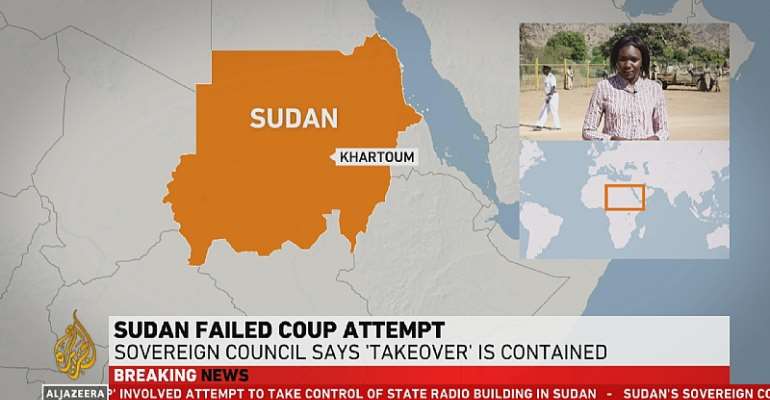 Sudanese authorities have foiled an attempted coup, the army said Tuesday, warding off a challenge to a civilian-military council that has run the country since Omar al-Bashir was overthrown in 2019.

A civilian member of the ruling council told Reuters the situation was under control after the attempted coup overnight had been contained. Interrogation of suspects was due to begin, the council member, spokesman Mohamed Al Faki Suleiman said.

The ruling body known as the Sovereign Council has run Sudan under a fragile power-sharing deal between the military and civilians following Bashir’s overthrow.

It plans to hold free elections in 2024.

“The military has defeated the coup attempt and the situation is completely under control,” the media advisor to Sovereign Council head, General Abdelfattah al-Burhan, told state news agency SUNA.

A government source, speaking on condition of anonymity, said the coup attempt had involved an effort to take control of state radio in Omdurman, across the River Nile from the capital Khartoum.

Measures were being taken to contain a limited number of people involved, the source said. All those implicated had been arrested, SUNA reported.

A witness said that military units loyal to the council had used tanks to close a bridge connecting Khartoum with Omdurman early on Tuesday morning.

It was not the first challenge to the transitional authorities, who say they have foiled or detected previous coup attempts linked to factions loyal to Bashir, who was deposed by the army after months of protests against his rule.

In 2020, Prime Minister Abdalla Hamdok survived an assassination attempt targeting his convoy as he headed to work in Khartoum.

Sudan has gradually been welcomed into the international fold since the overthrow of Bashir, who ruled Sudan for almost 30 years and is wanted by the International Criminal Court (ICC) over alleged atrocities committed in Darfur in the early 2000s.

Bashir is presently in prison in Khartoum, where he faces several trials.

The ICC’s chief prosecutor held talks with Sudanese officials last month on accelerating steps to hand over those wanted over Darfur. read more

Sudan’s economy has been in deep crisis since before Bashir’s removal and the transitional government has undergone a reform programme monitored by the International Monetary Fund.

Underlining Western support for the transitional authorities, the Paris Club of official creditors agreed in July to cancel $14 billion of Sudan’s debt and to restructure the rest of the more than $23 billion it owed to the club’s members.

But the economy is still struggling with rapid inflation and shortages of goods and services.