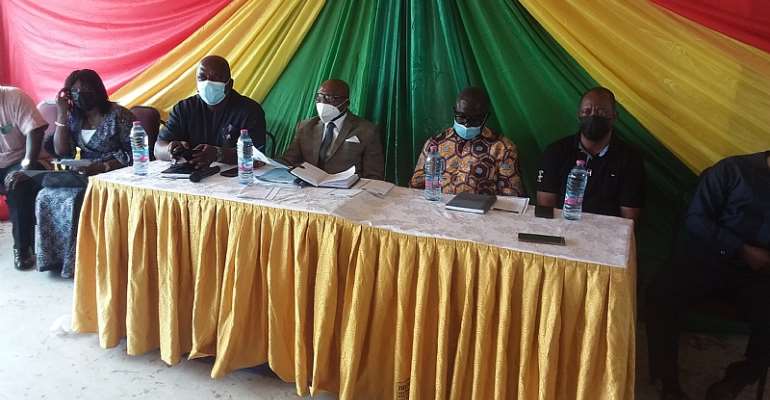 The Head of Service at the Local Government Service ( OHLGS), Ing. Dr. Nana Ato Arthur, has paid a working visit to the Korle Klottey Municipal Assembly ( KoKMA) with a call to collaborate and work as a team to propel the Assembly to the top.

The interaction which is the first of its kind since the Assembly was created in 2019 is anchored on professionalism, political neutrality as well as innovation and creativity.

The Local Government Service boss said it doesn't augur well for a well-known Assembly such as KoKMA to be number eighteen out of the twenty-eight Assemblies within the Greater Accra Region.

Dr. Nana Ato Arthur therefore pointed out that he would like to see Korle Klottey Municipal Assembly amongst the first ten best performing Assemblies nationwide when the 2021 Assemblies performance grading is announced.

He tasked the Municipal Chief Executive (MCE), Municipal Coordinating Director (MCD) and the Presiding Member (PM) to come up with mechanisms and strategies to ensure that the target set for Assembly is realised.

He argued that the certificate one earns at school doesn't make him or her a professional but rather how he or she performs, comports and conducts himself at work. He bemoaned the lackadaisical attitudes of staff towards work. Most staff, Dr. Nana Ato Arthur noted do come to work late and close early which is not the best practice.

To that end, he disclosed that the Office of Local Government Service has since 2019 introduced the electronic biometric working system in order to track performances and, reporting and closing times of workers in all the Metropolitan, Municipal and District Assemblies (MMDAs) nationwide.

He therefore tasked the Human Resource Unit of KoKMA to ensure the Assembly installed that system to help improve efficiency and performance of all staff.

Dr. Ato Arthur also cautioned staff of the Assembly to do away with politics in their respective lines of duty. Korle Klottey Municipal Assembly, he pointed out is not a political office but state-owned entity.

He added that staff of the Assembly cannot be seen openly engaged in active politics. “All Local Government Service staff must always remain politically neutral."

He announced that six staff of the Service who contested for parliamentary seats for both the New Patriotic Party (NPP) and the National Democratic Congress (NDC) during the 2020 elections were dismissed from the Service to serve as a deterrent to others.

The interaction between the Local Government Service boss and the Assembly was also graced by Hon. Samuel Nii Adjei Tawiah, the KoKMA Municipal Chief Executive ( MCE), Mr. Emmanuel Biasie, the Municipal Coordinating Director ( MCD), Heads of Departments and Units and the Presiding Member for the Assembly.