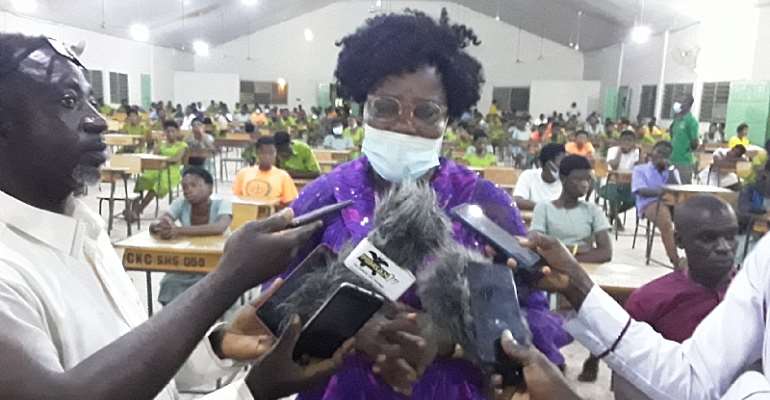 Honorable Faustina Amissah, the Nominee for District Chief Executive (DCE) of Obuasi East District Assembly has urged this year's WASSCE candidates to work hard and pass their exams without looking around for favors.

She said the time has come for the candidates to take their destinies into their own hands without hoping for other means to pass their exams.

In the company of the Member of Parliament for the Constituency as well as the Presiding Member, she praised the teachers for preparing the students adequately for the exams.

She was quick to add that the onus lies on the students to put in their maximum best to pass their exams once and for all.

She also revealed that the Assembly will from next week cut sod for the construction of a 20- seater water closet toilet facility.

The Member of Parliament for the Obuasi East Constituency Hon. Patrick Boakye-Yiadom also added his voice on calls for the candidates to put in their best efforts to pass the exams.

He also admonished them against examination malpractices.

He lifted the lid on the move by Government to build a fully furnished Computer lab for Christ the King Senior High School.

The Headmaster of Christ the King Catholic Senior High School Mr. Samuel Twumasi Ankrah said they have adequately prepared the students for the exams but regrets the fact that the school has recently been cited for Exams malpractices.

The students who spoke with this reporter said they have fully prepared for the exams and were sure they will come out with flying colours.

The 2021 WASSCE started on Monday, 16th August, 2021 with roughly 446,321 students taking part in the exercise across the country. The examination so far, has been peaceful and incident-free in Obuasi East District.