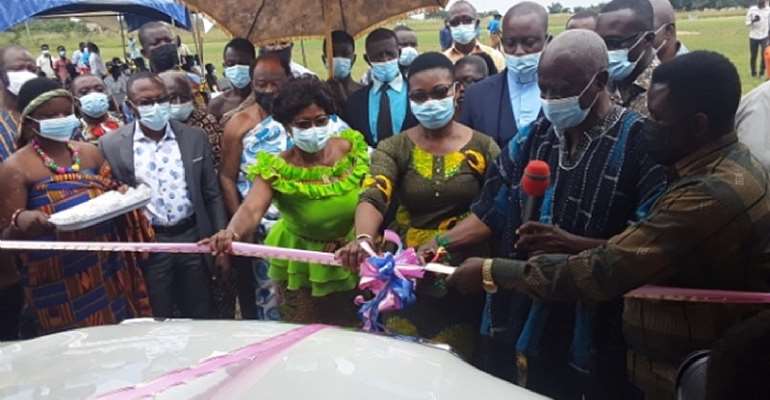 According to him, all the challenges of the school have not been tackled by government but urged the management of the school to appreciate the good work government has started in the school and do all it takes to impart knowledge to the students to excel academically.

He said hard work pays and for that matter, charged students to show respect to their teachers, avoid immoral behaviours which would jeopardize their future.

Hon. Boakye thanked the Chiefs for their leading role in maintaining peace in the Municipality.

He urged them to come together to fight for the developmental needs of the Municipality.

He indicated that the tremendous investments government has done in the school would go a long way to improve the school's academic performance.

On the achievements of the school, he said the school could boast of having Wi-fi internet facility, vehicles, etc. among others.

Presenting the keys to the headmaster of the aforementioned school, Mrs. Lucy Ankrah, the Ahafo Regional Director of Education said the vehicle would go a long way to enhance the day to day administrative work of the school.

He charged the headmaster of the school to put the vehicle into good use.

In his address, Hon. Collins Offinam Takyi, MCE for Tano South lauded government for providing infrastructure to the Municipality to improve the living standards of the residents.

He noted that government through Tano South Municipal Assembly has implemented a number of projects and programmes to improve the life of people in the Municipality.

Hon. Benjamin Yeboah Sekyere, the Member of Parliament for Tano South Constituency in his speech, said his office has liaised with the Assembly to take note of all developmental challenges confronting the Constituency and presented to appropriate quarters to be addressed soo.

The Krontihene of Techemantia, Nana Ampong Kromantain, who chaired the programme, thanked the President and the Regional Minister for their diligent roles played to acquire a bus for the Samuel Otu Senior High School at Techimantia.

He stressed that the free SHS Educational Policy has increased the enrolment in the school and called on government to take urgent steps to construct dinning hall, teachers' bungalows and boys' dormitories for the School on the school's 366 hectares of land.