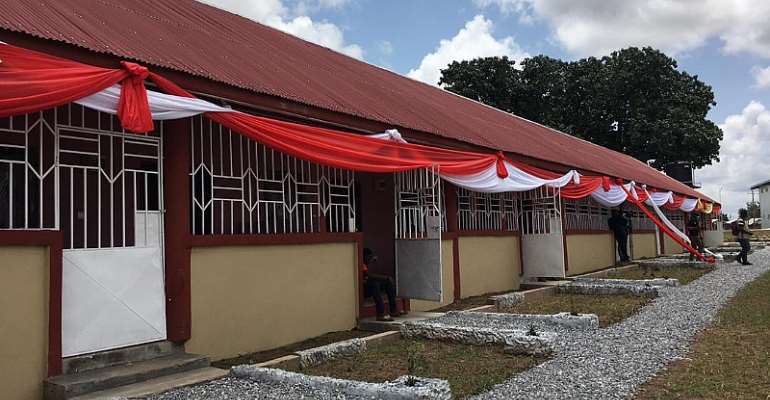 The Chief of Ejura Barima Osei Hwedie II on Saturday, September 18, 2021 commissioned a seven-unit ultra-modern block for fire fighters in the Ejura-Sekyeredumase District of the Ashanti Region.

The new building which was solely financed by the Ejura Traditional Council is to house officials of the Ghana Fire Service in the district.

Addressing a gathering during the official handing over ceremony, Barima Osei Hwedie II who doubles as Protocal Officer at the Office of the Vice President of Ghana stated that his traditional Council was determined in partnering with appropriate stakeholders in solving the accommodation and logistical constraints of the security services.

"Indeed, the non-existence of permanent accommodation for Fire Service officials in the District was seriously hampering the work of the Command of the Fire Service," he added.

To this end, Barimah Osei Hwedie II noted that Ejura Traditional Council made available funds for the construction of the accommodation facility complex, which was duly handed over on 18th September, 2021.

“Since ascending the throne five years ago, Ejura Traditional Council has embarked on a series of developmental projects including the construction of a six-unit apartment for the Medical Superintendent of Ejura Health Directorate, release of over 600, hectres of land for the Ghana Prisons Service, construction of a three-unit block for Ejura Anglican Basic School, fencing of Ejura Government Hospital among others," he stated.

Barima Osei Hwedie II urged the personnel of the Fire Service to ensure maintenance culture to prolong the lifespan of the building.

The event was also part of the activities to mark the 54th birthday of the chief and the 2021 Sekyerene Yam Festival which brought top government officials to Ejura community.

The National Deputy Fire Officer Madam Heran Boakye for her part commended Ejurahene Barima Osei Hwedie II for his support to the Service.

She disclosed that the Ejura-Sekyeredumase fire station which was established in 1992 to provide safety cover for residents in the area has massive support from stakeholders in the district particularly Ejura Traditional Council.