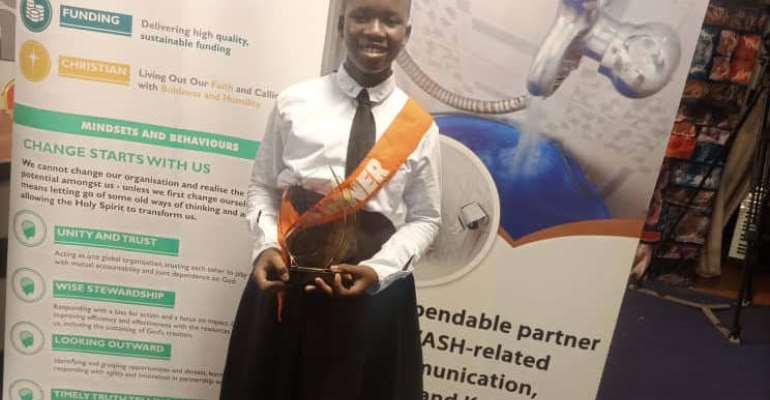 Naziru Mawada Titiaka, a form one student of the Damongo Model Girls' Junior High School in the West Gonja Municipal of the Savannah Region has been crowned the 2021 National Sanitation Diplomat following a keen contest.

The competition which was been put together by World Vision and Kings Hall Media saw a total of four students competing in the grand finale of the Triple Sanitation Challenge.

As part of her winning package, Mawada will be supported to implement a one-year sanitation project in Ghana. She also took home a cash prize of Ghc3,000, a laptop, branded T-shirts among other learning aids.

The various schools of the four finalists are to be supported with sanitation facilities.

Mawada's face beamed with striking happiness as she received the ultimate prize from the Minister of Sanitation and Water resources, Cecelia Abena Dapaah.

The fascinating story of Naziru Mawada Titiaka,12 year's of age, first came to the spotlight after blogger, Ananpansah, B Abraham reported that she had secured a slot to participate in the National Triple Sanitation Challenge.

She was selected among 10 qualified contestants drawn from applications received across the country for the second round of the essay competition based on her understanding of sanitation issues in Ghana.

The first round of the contest was the call for application, where students from the 216 districts in Ghana were asked to submit an essay on sanitation challenges in the country and how they intend to address those challenges as young leaders serving in the capacity of the President of Ghana.

Determined Mawada emerged the winner of the second round of the Triple Sanitation Challenge (Masters Encounter). The 12-year-old girl was adjudged first with a total of 89 points out of the four finalists selected at the Masters' Encounter. A total of six out of ten contestants were eliminated at the Masters' Encounter. All six excluded contestants received consolation prizes in addition to lunch and transportation.

Teachers of Mawada, who saw her victory coming are proud of her remarkable accomplishment.