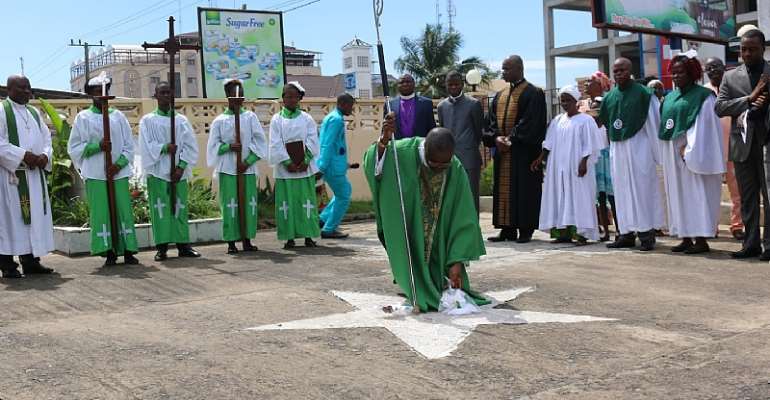 PHILADELPHIA, USA – Moses Thomas, a former general with the Armed Forces of Liberia (AFL) is found guilty for the killing of an estimated 600 civilians in the St. Peter’s Lutheran Church Massacre more than three decades ago, a court in Philadelphia, United States of America has ruled.

The U.S. District Court for the Eastern District of Pennsylvania found Thomas—who headed the Special Anti-Terrorist Unit (SATU)—ordered and directed the killing of people predominantly of the Gio and Mano tribes on July 29, 1990. It said he is liable for war crimes, crimes against humanity under the US’ Torture Victim Protection Act (TVPA) and the Alien Tort Act (ATC). The massacres is the single-worst atrocity in the Liberian Civil War and sparked out a string of retaliatory murders across 14 years (1989 -2003).

Four Liberians, known by the court as Jane W, John X, John Y and John Z for fear of reprisal in Liberia, filed the civil lawsuit against Thomas, 67. The court will now determine how much damage payment the victims will receive from Thomas, who fled the U.S. for Liberia last year.

“This judgment is a key step towards achieving justice not only for our clients, but also for other survivors and victims of Liberia’s civil wars,” said Nushin Sarkarati, senior staff attorney at the Center for Justice and Accountability (CJA), one of the two human rights organizations that represented the four victims . “The court’s decision establishes the historical record for the Lutheran Church Massacre…”

Thomas is the person to be held responsible for the massacre and is the only former member of the Liberian army to be found guilty of for an offense associated with the country’s bloody civil war, which killed some 250,000 people and displaced one million home and abroad. Liberia’s Truth and Reconciliation Commission (TRC) in 2009 posthumously recommended late President Samuel Doe to face prosecution over the killing and other crimes alongside other former soldiers. But more than a decade on, that is yet to happen.

“As the court recognized the survivors have been forced to file their suit in the United States because the Liberian government has taken no action to see meaningful accountability for civil-war-era violations,” said ,” Elizabeth Nielsen, counsel at Debevoise & Plimpton LLP, the other group that represented the victims.

Hassan Bility, whose group Global Justice and Research Project (GJRP) assisted in prosecuting Thomas said, “The Liberian government must investigate and prosecute him for this crime, and any others. Until there is domestic accountability in Liberia, survivors and victims cannot live in peace.”

The plaintiffs lawyers had filed for the summary judgement in the case following Thomas’ departure from the U.S. Under U.S. Federal Rule of Criminal Procedure , complainants can file a summary motion for a judge to decide a case based on the evidence they provide as long as the defendant in the case does not dispute the evidence.

Efforts to get Thomas on his mobile phone did not materialize.

Thomas had requested the court to dismiss the case in 2018 when it was first filed, arguing it could not be heard under the Torture Victim Protection Act of 1991 as the massacre had passed the 10-year statute of limitation. However, the court dismissed that argument. It ruled that the victims could not file the case in Liberia as the country had not tried anyone over the war. It said the victims feared retaliation from former soldiers, and that the Liberian judicial system was not willing to prosecute such cases. It use the same yardstick to try the case under the Alien Tort Statute (ATS). TVPA and ATS allow federal courts to trial foreign nationals for extrajudicial killings allegedly committed on a foreign soil, and ones that violate international laws, respectively.

After he fled to Liberia and the victims’ lawyers filed for a summary judgement, his legal team argued that the case was based on hearsay and the claims of the plaintiffs were inconsistent. But the court squashed that argument, saying his accusers’ accusations withstood the “farrago of hearsay and inconsistency.”

From a church to a slaughterhouse

By July 1990, most of the country was controlled by rebels, except Monrovia by the army loyal to late President Doe. The soldiers hunted Gios and Manos, who they accused of being collaborators of the National Patriotic Front of Liberia (NPFL), led by future President Charles Taylor.

Many members of the tribes sought refuge in the St. Peter’s Lutheran Church after the army attacked the United Nations Compound, USAID headers other places holding displaced people. No one thought they would attack the church, which had been set up by the International Committee of the Red Cross and the Liberia Council of Churches.

“The soldiers said not one Nimba man will leave,” said John X, who lost his wife daughters and brother, according to court filing. “Before the arrival of Taylor, there will be no Gio men. I heard people begging for their lives and saw soldiers searching everywhere for survivors and killing people, including a man wearing a Red Cross vest, with cutlass, axes and guns.”

“I whispered my little brother’s name at this boy, even though I knew that my little brother was in the school building with my mother,” John Y, a child at the time, recalled. He hid in the church’s pulpit with a little boy but was shot in one leg. “I just wanted to have my family alive with me, and the thought that my brother was next to me kept me believing that I could survive.”

Like the John X and John Y, Jane W and John Z also witness the bloodbath. Jane Z lost her husband and daughters, while John Z debilitating headaches,” according to court filings.

Many people injured during the massacre were killed at the John F. Kennedy Hospital and other facilities, where they went to seek medical attention. Some were taken to the north end of the runway towards a mangrove swamp and murdered, according to survivors, like Fubbi Henries , 41, and George Williams , 68.

“This is what we have been longing for and we hope this can be emulated here Liberia,” said Melvin Johnson, deputy executive director of the Liberia Massacre Survivors Association. “This is a wakeup call to for justice in this country.”

James Harding Giahyue writes about the environment and justice. He is the founder of The DayLight , an online environmental newspaper.