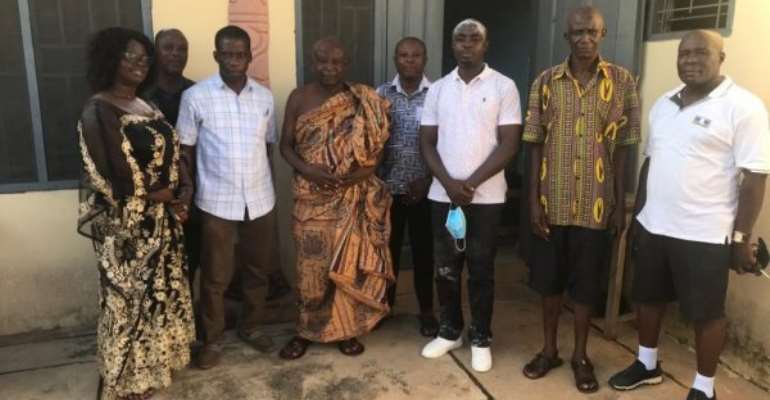 Mr. Ansu Kumi, President's nominee as the Sunyani Municipal Chief Executive has called on Barima Kumi Acheaw, the Chief of Abesim to support his confirmation.

The chiefs and people of the town could not hide their joy for the President's nominee, who is a native of the town.

Barima Acheaw, who is also the Kyidomhene of the Dormaa Traditional Area received the nominee with joy and expressed appreciation to President Akufo-Addo for providing an opportunity for a native of the area to serve in his government.

He advised the nominee not to betray but justify the confidence the President and the NPP had reposed in him by working hard and assured him of the people's unflinching support.

Mr. Kumi, who hitherto his nomination was an Assemblyman in the area and the Sunyani East Constituency Secretary of the NPP said he was humbled and delighted for his nomination and appealed to the Assembly Members to confirm his appointments.

He pleaded with the people of the town to provide him with the necessary support and advice towards the development of the Municipality.

Accompanied by Mr. Kwasi Ameyaw-Cheremeh, the Member of Parliament for Sunyani East and Board Chairman for Bui Power Authority and other NPP Constituency executives, including Mr. Ebenezer Opoku, the Constituency Second Vice Chairman, Mr. Bartholomew Nathaniel Incoom, and Constituency Organiser, the President's nominee visited and interacted with the Zongo community.

Mr. Kumi expressed appreciation to President Akufo-Addo for his nomination, saying “scores of congratulatory messages I have received this morning are an indication that the people and the Party in the Municipality are solidly behind me”.

He pledged to work diligently to ensure the development of the Sunyani Municipality was uplifted.