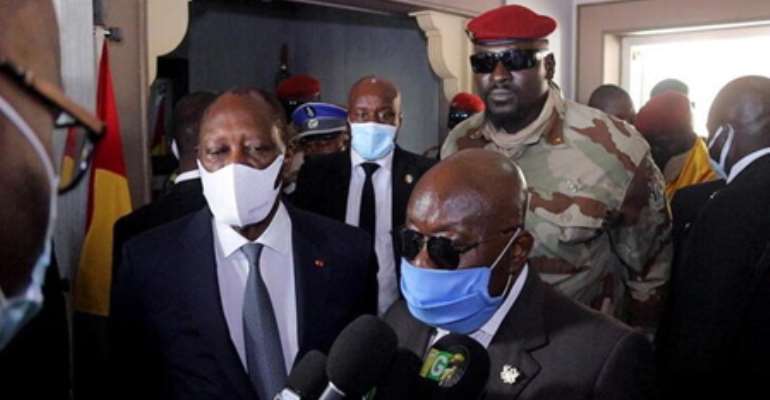 The week that was, that is last week, I had a basketful of topics, each begging for an exclusive commentary on its own. They were all imbued with enough relevance to stand on their own, but I am lumping them all together in these columns

Bedlam is a word that is becoming increasingly regular in my daily word count. I have used it a number of times in these columns, in chats with family and friends but more often, in my mind.

Election 2016 saw how the words “incompetent” and “corruption” could be used to hog the headlines and leave a worthy or even better aspirant for a second term stumped for words to fight back. That’s what they succeeded in doing to President Mahama, the sitting president then. By the time the first votes were cast in that particular election, change from “incompetence” to competence, change from “corruption” to “incorruptibility” had made up many minds.

The images were also that catchy. In Accra, travelling from Legon to the airport area, just before the Heritage Hotel, was this piece of roadside campaign message. It stood alone from the clutter of other campaign and general advertising material and showed the faces of Nana Akufo-Addo and Dr. Mahmoudu Bawumia – well lit in a black background looking surreal and haunting but with an attraction one could not easily disengage from. I was drawn into it any time I drove by, whether I liked it or not. Their godlike stares had an accompanying copy that simply said “Our Only Hope” or words to that effect. There was no missing that. A tour de force in roadside political advertising.

Being a John Mahama voter myself, anytime I drove past it, something not at all that honourable overcame me! So consumed was I with a passionate dislike of this image that, if there had not been a law criminalizing the willful destruction of campaign material by opponents, I would one day have stopped my car and gone at it with the stampeding power of a bull at a red flag. An exaggeration and not characteristic of me, but that image alone told me that the anti-Mahama campaign was working. Hardly any wonder that those who believed in that hype looked forward to heaven, nirvana or bliss from 2017 on…The Mahama-must-leave-the-scene pitch was working.

And the promises were all succulent too: One district one factory; a million dollars to each of the 270 constituencies; dams for all districts; non fee paying high school education; and most mouth-watering of all, Ghana would be transformed within 18 months of a Nana Addo government into whatever that vague promise entailed…My prayer, my wish, my hope, was that the electorate would not bite that bait. The electorate disagreed and bit quite deep into the Nana Addo/Bawumia bait and dispensed of what Mahama had to offer – not promises, but tangible achievements. Fair enough, the electorate had spoken and on January 7 2017, Mahama left the scene and Akufo-Addo and his band stepped in on the road to Bedlam.

On January 7 2017, inauguration day, we had an ominous and inauspicious foretaste on this very first day. One of the most egregious crimes in the literary world was to be committed, in the full glare of the local and international media, diplomatic representatives and the general public: Plagiarism! Ghana immediately became the laughing stock of the world, and from then on, it’s been from one Bedlam ward to the other all the way to an election in 2020 that saw one of the most unacceptable faces of democracy in our history in which institutions of state like the electoral commission and the judiciary were openly complicit. But for our innate restraining ethos of fama Nyame, Ghana would have exploded into a fiery post-election conflagration – and oh yes, we were that primed and of course, as a result of that, Nana Addo “won” that election…

“Thou hast it now…” and how has it been? Ghana has NOT been transformed into any quantitative or qualitative state since “our only hope” spooked me some five years ago. Ghana in many, many respects is worse than what Mahama handed to Nana Akufo-Addo on January 7 2017. The facts can be accessed from public records, but what happened that Nana Addo’s pre-2016 fanciers like A-Plus, Blakofe, Captain Smart, the tip of the anthill and others have turned so virulently against him. They are all openly nostalgic for the Mahama days. Even in the Diaspora, journalists like Kevin Taylor (a self-confessed NPP card holder) have gone ballistic and there’s no restraining their Akufo-Addo disappointment…Could they simply be Akufo-Addo haters or as I believe, voices struggling against the rising tide of Bedlam in their country? And oh, what ever happened to the elitist “Occypyflagstaffhouse”? Now it is #fixthecountry by the country’s youth!

They finally handed over our rosewood to the building. I commented on a WhatsApp platform I belong to: “Really? I would think that in fairness, equity, transparency and good governance, the wood, which is state property, cannot just be handed to a private estate without opening it up to the citizenry in a public auction...” This, in my own understanding of the word “stealing”, is stealing in broad daylight – taking something that belongs to the citizen, the taxpayer and handing it to your private project. If they go ahead and use the rosewood, in the cathedral’s physical or decorative structure, they would have embedded bits of stolen items in the building. Those who tried to smuggle the wood out of Ghana were committing a crime and those who expropriated the smuggled items after they had been seized are equally complicit in the crime. As a result, it will be very difficult, in fact, impossible for the building to receive consecration and all those men and women of God lending their support to it also risk putting their own anointing in danger. This is a project to the glory of a politician not God. Taking a peek into the future, should the office of special prosecutor survive, that would certainly be dragged there and surely, a future non-NPP government would diminish its “priority of priorities” status and it will find its way to join other infamous structures like Houphouet-Boigny’s mother of all cathedrals in Yamoussoukro or Mobutu Sese Seku’s Gbadolite jungle city – all expressions of Bedlam.

The really funny one. Nana Addo’s Rasputin found himself entangled in all sorts of cloak and dagger drills that saw him in and out of police cells and a sojourn in hospital. His case is still sub judice, so no commenting on that, but the idea that he, with the power of prophecy could not see his humiliation coming has been most surprising. In handcuffs and all, the man who “prophesized” that he had seen it clearly that Trump would win the US 2020 elections could not see in one of his massages from God that his own impending humiliation was at hand. Rumour has it that he was so shocked that he cried like a baby, obviously not imagining himself ever cooling his heels in a police cell for fair or foul reasons. A crude photo-shopped image of him, bare-chested and spotting a pair of boxer shorts has been doing the rounds on the social media.

I encountered him many years ago on Adom fm, just before Election 2012. I was on a programme defending my honour against an individual called Kofi Ghana who had been maligning me and Ben Ephson. On the same programme this Rasputin was holding forth that he had a vision that if Ghanaians did not vote for Akufo-Addo, an unimaginable calamity would befall the country which would consume us all. He was swearing and screaming. I remember thinking, “Who is this quarrelsome fellow?”

The elections came and went with John Mahama winning and Ghana suffering no calamity in the process…Over the years, his mix of rabid partisan politics and messianic evangelical Christian preaching have made him something of a nuisance with his servile lapdog antics propping up Nana Akufo-Addo. When I was asked what I thought of Rasputin’s outburst by the programme host, I said I also knew of someone who said his vision showed Mahama winning and moreover, with the powers he claimed to have, he should be in a position to pray and avert calamity…

A conspiracy theorist has told me that only two conclusions can be drawn: 1)Akufo-Addo had a hand in it directly or indirectly to prepare the grounds for a clamp down on his perceived enemies, hence the “sacrifice” of such a close apologist and 2)If Nana Addo had no hand in it, then he must be ware, for that’s a sure sign that he has lost ground and is losing control, if he has not already. Rasputin was granted bail a day before my birthday; his principal left for Conakry on my birthday, and what is this I hear of an individual called Agrada and alleged death threats that may or may not have something to do with poor, poor Rasputin’s date with the police? I have seen a few disturbing clips about that and heard clips on his innocence by his assistants – yet more events in Bedlam.

Hooting them out of town!

They must be very tall in Guinea, (Pls., see pic above). Messieurs Alassane Ouattara on the left and on the right Nana Akufo-Addo, emissaries of ECOWAS and in the middle, towering above them, Mon Colonel Mamady Doumbouya, new President of Guinea. The three, posing in Conakry, the capital of Guinea, last week, after discussing the very peaceful change of power from a civilian administration to a military one. ECOWAS must have a warped sense of humour indeed, for selecting those two to go and issue threats of sanction to the new Guinean government, which came to power through a bloodless change-over. Nana Akufo Addo, with the dubious reputation of organizing a bloody electoral process to win a second term and Alassane Ouattara, who sent his country very close to the brink when he too tried to manipulate his country’s constitution to hold on to power.

Guinean citizens turned out in their numbers to hoot out of town the ECOWAS pair. Colonel Mamady Doumbouya had listened politely to them before sending them packing. A social media video clip on their hurried departure had the following caption: “Akufo Addo, Alassane Ouattara and the ECOWAS delegation hooted at in Conakry by the people today. They were saying: "CEDEAO, zero! meaning: ECOWAS, zero! The people praised Col. Doumbouya and his men and said the Guinean population has decided!”

And it is such a shame, because it is ECOWAS that has come out of this with its integrity in tatters, in fact, the butt of jokes. The negative comments have been overwhelming: Nana Addo and Ouattara had no business there. So does that mean that “coodetas” are back in fashion? Bedlam on the sub-regional level and a very disturbing prospect.

Dr. Ben Abdallah is still alive. Sorry for the mix-up from