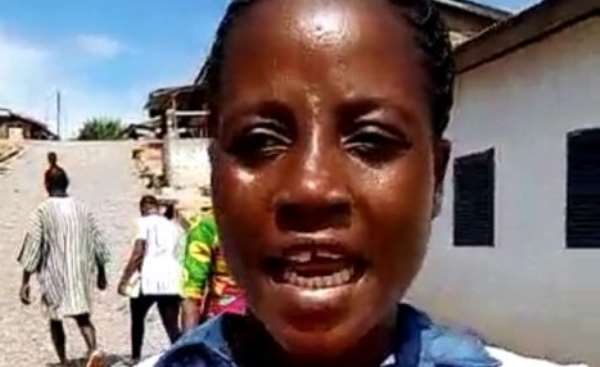 A group of disappointed supporters of the governing New Patriotic Party (NPP) in the Nzema East municipality who embarked on a demonstration exercise on Sunday to demand the retention of the incumbent Municipal Chief Executive, Frank Okpenyen, have asked the party to come for its logistics.

They said they would not work or campaign for the NPP again in next general elections.

According to them, the President nominee campaigned against the party in the 2020 general elections.

Speaking to Citi News at Axim, Dorothy Quayson, an aggrieved supporter of the NPP said the President's nomination is only being celebrated by supporters of the National Democratic Congress hence they can no longer work with the party.

“NPP supporters are sad or not jubilating in Evalue-Ajomoro-Gwira after the President's nomination because President Nana Akufo-Addo didn't listen to our plight. It is the NDC supporters who are celebrating the nominee. We know what is happening here and we said the lady nominee campaigned against NPP. In fact, the nominee is both NDC and NPP. Right now, it is the NDC MP and his supporters who are celebrating the President's nominee. Nana Akufo-Addo will finish his term by 2024 so whoever will come after him will have to come and do his campaign here. We, the Evalue-Ajomoro-Gwira residents wouldn't work for NPP again since they want to hand over the seat to the NDC, and they managed to achieve that with the NDC taking the [parliamentary] seat”, she said.

Maame Esi, another disappointed Axim NPP supporter, blamed the sacking of the MCE, popularly called Franko on his association with Catherine Afeku.

“I'm so sad now. Their action is a clear sign that they want to uproot Catherine Afeku from this town. We don't have anything to say again. However, they should be careful with what they are doing. They should ask the Dorcas lady they have nominated if she has ever voted in Nzema East before. We know their decision is because of his support to Catherine Afeku,” she said.

For Western Region, out of the 14 MMCEs, half were replaced with new ones.

Out of the seven that were changed, only Wilson Arthur of Wassa East did not apply to be maintained.

Latest Photo Reports
Catch up with all the political quotes from our politicians.
Advertise here
More NPP News
ModernGhana Links
27 E-blocks: Termination of contracts long overdue – NPP Chairman
Disgraceful NPP could find money for 'useless' things but none for 27 Mahama E-blocks – Ablakwa jabs government
“I came back from exile and I’ve served NPP faithfully, loyally and hard’’ — says Boakye Agyarko as he declares intention to lead NPP into 2024 polls
A/R: We don't want a Chairman who display gold on TV but neglect his boys — NPP's Delta Force members hoot at Wontumi at delegates conference
Ashanti Regional NPP holds delegates conference
Former NPP MPs want voting rights in party elections
A/R: Am your Messi, kick me out from NPP and you'll suffer like Barcelona in 2024 – Chairman Wontumi warn delegates
'We can't complete all E-blocks at once; we came with our own agenda' – Former Adentan NPP PC
Fuel price hikes: NPP's ghost haunting them – Victor Quarshie
TOP STORIES