Global demand for cashews is booming. How Ghana can take advantage to create jobs 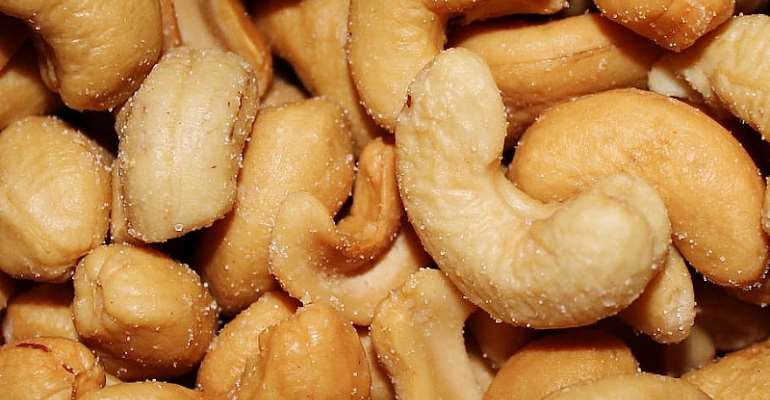 Key cashew producing countries in Africa are rolling out strategies to increase production and processing of raw cashew nuts. - Source:

The global cashew industry has grown rapidly over the last decade, driven by increasing consumption of cashew nuts around the world. And the market for raw cashews is forecast to continue growing at an annual rate of 4.27% between 2020 and 2025. It is expected to reach almost US$7 billion by 2025.

The growing demand for cashew nuts around the world, particularly in developed and emerging economies, is driven by a number of factors. They include recognition of their health and nutritional benefits and the growth in plant based diets. Cashew nuts are also considered a substitute for dairy products and they represent a popular savoury snack . They are also a substitute for the ever popular peanut butter .

African countries are at the forefront in responding to this growing demand. They have increased production.

Demonstrating this, the African continent now accounts for over 50% of raw cashew nut . About 90% of all Africa's production is exported, mainly to Vietnam and India. These two countries account for 98% of the world's raw cashew nut imports. Vietnam and India deshell and process cashews before re-exporting them to the US, Europe, the Middle East, China and Australia, where they are in turn roasted, salted and packaged prior to consumption.

The low rates of cashew nut processing in Africa's cashew producing nations is driven by a number of factors. These include limited infrastructure and local processors. But a number of African governments have recently put in place policies and measures to address these shortfalls. There are still gaps though. Research is needed to understand better the structural challenges that constrain local processors.

Ghana is among Africa's major producers of cashew nuts. Ghana currently produces around 85,000 metric tonnes of raw cashew nuts each year, which accounts for about one percent of the worlds' total production. Of this, over 90% is exported to India and Vietnam by Asian exporters and processors.

Cashew production in Ghana dates back to the 1960s , with production for export markets expanding significantly in the last decade.

There are a number of challenges that hinder local processing of cashew nuts in Ghana. Key amongst these is a lack of capital to maintain operations, alongside the inability of local processors to access raw cashew nuts from farmers - the latter of which is exacerbated by poor transport infrastructure. Although local processors are able to access loan and credit facilities from commercial banks, high interest rates leave this an unviable option, especially for small domestic operators.

Cashew farmers also demonstrate a preference for selling their nuts to Asian processors and exporters who pay them immediately in cash. Local processors, in contrast, often purchase cashew nuts on credit.

These conditions leave Ghana off the field, thereby missing out on the significant opportunities for jobs and revenue generation via the booming global cashew industry. Recent estimates indicate this loss at about $100 million each year. This loss is primarily tied to Ghana's inability to process - and thereby add value to - its raw cashew nuts.

The way forward: Ghana should learn from other countries

Governments in key cashew producing countries across Africa are increasingly rolling out strategies to increase both the production and processing of raw cashew nuts. For example, in Cote d'Ivoire, the largest exporter of raw cashew nuts in the world, an export tax of FCFA 30 per kg of raw cashew nuts has recently been introduced. Revenue from this tax is then used to subsidise and support local processors. This has incentivised local processing, making Côte d'Ivoire, Ghana's neighbour, the largest cashew processor in Africa , with a capacity of 70,000 metric tonnes annually.

Similarly, Mozambique and Tanzania have adopted a range of measures to protect and incentivise local cashew processors. These include granting local processors preferential access to raw cashew nuts. It also includes imposing export duties on raw cashew nuts. Meanwhile, since 2009 Kenya has introduced a ban on the export of raw cashew nuts , a strategy which has increased local processing from 30% in 2009 to 80% in 2012.

The Ghana Export Promotion Authority is currently working with Cashew Industry Association of Ghana to increase local processing. This collaboration may benefit by drawing from the experiences of other African countries, including to guide a national cashew processing strategy.

With appropriate support, Ghana may be able to take advantage of the growing demand and consumption of cashew nuts in the developed and emerging economies, with outcomes that will generate jobs and revenue.

Kristen Lyons is a senior research fellow with The Oakland Institute, and member of the Australian Greens.

James Boafo does not work for, consult, own shares in or receive funding from any company or organisation that would benefit from this article, and has disclosed no relevant affiliations beyond their academic appointment.

By James Boafo, Lecturer in Geography and Sustainable Development, Kwame Nkrumah University of Science and Technology (KNUST) And