GUTA members lock up shops of foreign retailers in Koforidua 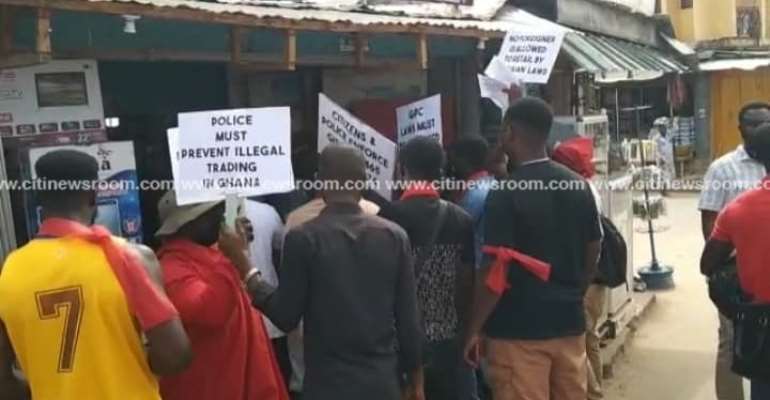 Over 40 shops belonging to foreigners engaging in retail trading in Koforidua have been locked up by members of the Ghana Union of Traders Association (GUTA) in the Eastern Region.

The members on Monday, September 20, 2021, embarked on a demonstration to register their displeasure about the continuous involvement of foreigners in retail trade in the New Juaben South Municipality.

They proceeded to lock shops of foreigners in an attempt to have their issues resolved.

The peaceful demonstration almost turned violent when the owner of Mighty Light Plus Shop which is adjacent to the Koforidua Central Police station broke the locks placed on his shop and started trading; a situation that infuriated the GUTA members who heckled him and forced him out of his shop.

The angry members who protested wielded placards with inscriptions such as “Obey Act 865 section 27A now”, “Police must prevent illegal trading”, “Foreigners are prohibited from retailing our markets”, “We shall police our own market”, among others.

Darlen Nana Boateng, the Public Relations Officer of GUTA in the region, spoke to Citi News.

He said members will use all legal means to prevent foreigners from engaging in retail trading in the region.

“Right now, it has turned a bit chaotic, although that is not the plan we came out with. Our members shut down a shop but when the business owner came in, he opened the shop and insisted that he will work and whatever it takes, he will not comply with the directive. No one is here destroying anybody’s business, but people should not, on their own, take the law into their own hands and be resisting the laws of Ghana. The foreign retailers should just comply with the law.”

Some other members who also spoke to Citi News about the activities of the foreigners expressed worry over the development and asked for immediate intervention.

Over the years, there have been various disagreements between Ghanaian traders and their counterparts from other countries, particularly Nigerians.

The local traders have argued that per Ghana's laws, foreigners have no right to engage in retail trade within the country, as their activities affect the local retailers negatively.

The government subsequently set up a presidential committee to properly scrutinize all foreigners engaging in trading activities in the country.

This has led to the closure of several shops belonging to foreign retailers across the country.

But last week, GUTA threatened to resume locking up shops of foreigners because of stalled negotiations under the Joint Implementation Taskforce.

The brunt of GUTA's action in the past has been towards the Nigeria Union of Traders Association, Ghana (NUTAG).

Though there is free trade among ECOWAS countries, Ghana's laws say a person who is not a citizen or an enterprise that is not wholly-owned by a citizen shall not invest or participate in the sale of goods or provision of services in a market, petty trading or hawking or selling of goods in a stall at any place.

There is also a $1 million minimum capital requirement for foreigners doing business in Ghana, in line with GIPC Act.