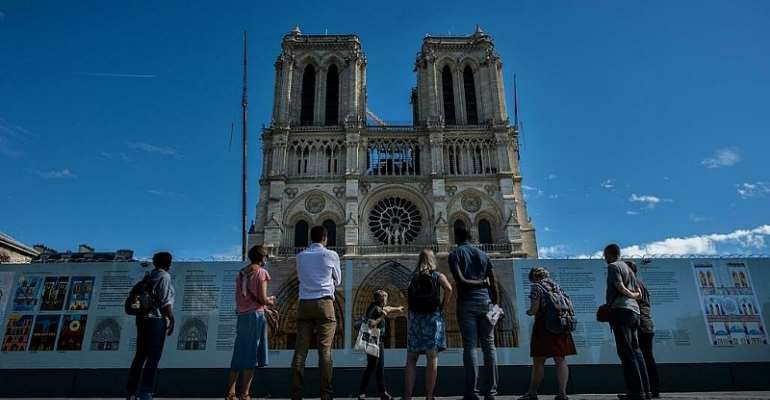 France's Notre-Dame cathedral is finally ready to undergo restoration work more than two years after a blaze ravaged the heritage landmark. It also remains on course to reopen in 2024, following months of painstaking work to secure the building.

"I think she has been definitively saved," Patrick Chauvet, rector of the Notre-Dame de Paris cathedral told FranceInfo on Saturday, marking the last day of works to secure the building before the long restoration phase can begin.

"We will discover frescoes which we could barely see because of wear and tear, and we'll rediscover the whiteness of the stone as it was 850 years ago. It will completely transform the cathedral," he said.

The great medieval edifice survived the inferno on April 15, 2019, but the spire collapsed and much of the roof was destroyed.

The focus until now had been on making the cathedral safe, including the strenuous task of removing 40,000 pieces of scaffolding that were damaged in the blaze, a process which has cost some 165 million euros.

"The cathedral stands solid on its pillars, its walls are solid, everything is holding together," said Jean-Louis Georgelin, head of the public entity tasked with rebuilding the cathedral.

"We are determined to win this battle of 2024, to reopen our cathedral in 2024. It will be France's honour to do so and we will do so because we are all united on this goal."

The aim is to celebrate the first full service in the cathedral on April 16, 2024 -- five years after the fire -- despite delays caused by the pandemic and the lead that spread during the blaze.

Costly project
However, the church will most not likely be open in its entirety, indicated Christophe Rousselot, general delegate for the Fondation Notre Dame.

"The cathedral will be ready to open towards the end of 2024, but the restoration will not be fully finished. There will most likely be a ceremony to open the Olympic Games for example," he said, adding that there have been several small ceremonies held already in the church despite the continuing works.

He also says there is no concern over the funding of the restoration.

"There is 823 million euros in the coffers, which will cover what has been spent and what is to come. People often ask me if we are sure of receiving this money; and the answer is yes, because we have set up contracts with the sponsors."

Authorities will now call for tenders to select the companies to carry out the restoration work.

The cathedral's interior walls and floors will also undergo "a thorough cleaning process" later this month.

Notre-Dame's famous Grand Organ is already being restored, with its 8,000 pipes dismantled and sent to organ builders all over France.

It is expected to be put together again in October 2023, said Georgelin, the former head of France's armed forces who was appointed by President Emmanuel Macron to oversee rebuilding efforts.