Calling All Critics: Kufuor is in charge of his gov't; 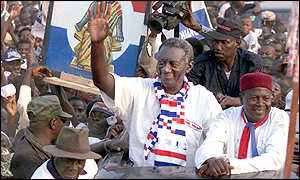 ....are you in charge of your emotions? Under President John Agyekum Kufuor, Ghana is undoubtedly basking in an unprecedented environment in which the freedom of the press is under the least attack. To some of us, that is the best thing to happen to our nation in a long time. After all, the free flow of ideas and opinions form the very basis of true democracy, and Ghana will be the better for it. While we enjoy this unprecedented freedom of expression, however, it may be worthy to note that the judicious use of that freedom is just as good for our country. There is little doubt that the world is looking at us, mostly in disbelief, of how we have come so far with this way of governance that many thought would not work in tandem with the African culture. So far, we have proven them wrong. How did we do it? During the most immediate former administration, the atrocities committed by government officials were such that the appropriate media coverage would have meant some serious name-calling. To its credit, the Ghanaian media exercised great restraint. Two factors were responsible for that restraint. The first was the criminalization of the libel provision by the Rawlings administration that made it easy to jail authors of potentially libelous articles. Let the records show that President Kufuor threw that provision out of the window as soon as he assumed office. The second factor has more to do with sophistication on the part of Ghanaians. Some would call it cowardice, but it has helped us to maintain our record of a civil war-free society. Now that the opportunity has been presented to us to freely express our opinions, it comes as no surprise that some, like Kwame Appiah-Yeboah would want to test the limits. In his article titled “Is President Kufuor In Charge Or ……….,” Mr. Appiah-Yeboah not only elected to twist the facts. In fact, in an obvious attempted to tarnish the image of the only real president we have had in the last two decades, he chose to publish a picture of President Kufuor sipping a toast at his birthday. Combine that picture with the title, and myopic minds are likely to draw the intended conclusion of a non-challant, boozing president. We all have our biases, but Kwame, let us not stoop that low. I am proud to say that, in spite of everything that Rawlings did, and stood for, I wrote an article in the Houston newspapers calling for a nurturing of the democratic process. It may have caused us several years for putting up with Rawlings’ rule, but considering where we are politically, it was worth the wait to allow the democratic process to mature. If we could do that in the face of some of the most atrocious behaviors by any president, including physical assaults on members of his cabinet, the least you can do is criticize constructively. In fact, President Kufuor will be the first to tell you to hold him to a higher standard. He has mentioned to us that in defending him, we should try and avoid drawing any comparisons between himself and his predecessor. A higher standard, however, does not mean blatant disregard for decency. We are very fortunate to have a president like John Agyekum Kufuor. May be his statements are a tag above Mr. Appiah-Yeboah’s comprehension. When a president advises his cabinet “not to be daunted by the suspicion and criticisms of bribery perceived by the people,” he is only trying to thicken their skins in expectation of assaults like the ones Mr. Appiah-Yeboah is hurling. Nowhere in that statement is a condoning of corruption. On the issue of travel allowance to government officials, the critics are woefully unrealistic. When you pay a government official $23 in allowance to travel abroad, two things will happen. First, those officials will completely disregard the official allotment and find ways to pay themselves ridiculously higher allowances, which we saw a lot of in the past administration. Second, they would not travel at all. And we all know that there is a tremendous amount of business abroad to be solicited. As such, rather than crying over $200, may be we ought to be asking what those foreign travels are bring in. The President’s foreign travels that have been a subject of baseless criticisms have amounted to a saving of $200,000 annually. This is the amount we were paying just to service our foreign debt. And that is just the beginning. But I guess the likes of Mr. Appiah-Yeboah would rather save $200. How do you spell Myopic Minds? Now let me say a word about the $20,000 car allowances. Why we are even talking about this is mind-boggling. We know our government officials need vehicles to perform their duties. We know there were plenty of vehicles used by the previous cabinet. These were government properties. If they were around, I doubt there is a single minister or parliamentarian who would have a problem using those government-owned vehicles. But they were all gone, thanks to yet another statute that allowed the NDC cronies to buy those vehicles for pesewas on the cedi. In any administration, there are mistakes. When they occur, we are certainly within our rights as observers and concerned citizens to point them out. No one believes in this practice more than President Kufuor himself. My advice to fellow Ghanaians, however, is to be judicious about how we nurture our democracy. There is no place in Ghana today for unnecessary inflammation of passions. We had ample opportunity to do that during the last administration, but we practiced restraint. Now is hardly the time to begin.