Is President Kufuor in Charge or ..... 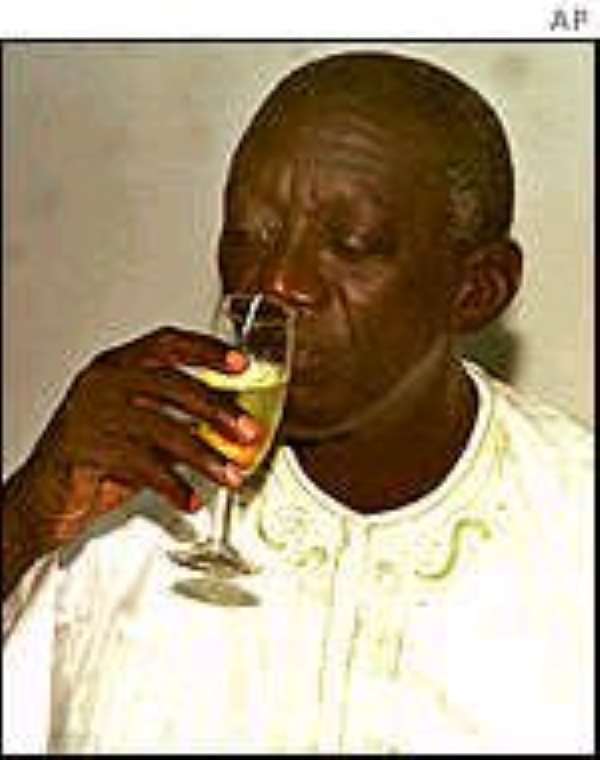 ...Would the Person Really in Charge Please Stand Up Please Stand Up? The above question has been playing on my mind and I am sure that of hundreds of Ghanaians as well. Coming events they say cast their shadow and if care is not taken, the shadow over Ghana will herald only doom. Having come out of the shadows of darkness, fear, intimidation, mob rule, ‘shitocracy’ and the like into the ‘light’ it is imperative that we desire the ‘light’ and actively seek to stay within the ‘light’. Senior Prefect now turned senior minister J.H Mensah has made some pronouncements in parliament that directly or indirectly seems to imply that the president’s pronouncements on the $20,000 car loans for MP’s should be ignored1. The president’s position was that equipping the police was his number one priority not car loans for MPs. The question then becomes, who created the senior minister such that he can effectively ask all Ghanaians to ignore the president. Or the senior minister knows more than the president or maybe the senior minister is in charge. I want to agree with the statement attributed to Alban Bagbin who described, “2President Kufuor’s claim of ignorance over the $20,000 car loans allocated to Members of Parliament as unfortunate and a clear indication that there is no team work in the governance of the country.” President Kuffour and the NPP came to power chanting zero tolerance for corruption. The rule of law and respect for individual right were to be respected. A few months later at the swearing in of four new ministers the president makes the following remarks: “3 He asked them not to be daunted by the suspicion and criticisms of bribery and corruption perceived by the people,” That sounds like a different tune to me. I believe cautioning the ministers to lead a life that will not allow those kinds of suspicions to enter the mind of the electorate should be the message. The president further adds “3 If you are not able to discipline yourselves but show tendencies that are likely to mar the joint efforts of the team, government would not protect you and you would have yourself to blame,” The central regional minister flouts the laws of the land and is reprimanded, advised to go and sin no more. A few weeks later Attorney General (AG) Akuffo Addo4 drops legitimate case against Victor “Where is Dr. Boadu” Selormey and later apologizes to the cabinet. The message that action sends to Ghanaians at large is that; steal but don’t get caught but if you get caught, make a deal with the AG and pay back the money to the state-end of story. The action by the AG clearly negates the statement made by the president above or points in the direction that the president is not in charge. Mallam Issah offered to pay for the missing $ 46,000. The question is where is he right now? He is a guest of the state. The amount of per diem paid to government officials who travel abroad has been increased by over 700% from 23 to 200 dollars 5. No wonder the president finds every conceivable excuse not to stay at home. Today it is to US, tomorrow UK, next week Canada. The next time we hear he will be in Afghanistan or the North Pole. I thought judicious use of scarce resources was a key to managing the economy. This quote from Ghana news puts the issue into perspective. “5 Foreign Minister, Hackman Owusu Agyeman has been defending the controversial decision to increase the daily allowances given to government officials who embark on foreign tours including trips with the President. Officials now receive $200 instead of the $23 they previously received.” Finally, the nation is being saddled with the mother of all crimes (there is no better description). I believe somewhere on our statutes and law books the importation of right hand drive vehicles were banned. By some magic we read, hear of and finally see 14-year-old right hand drive buses on our roads, ostensibly imported by the government to solve or transport needs6. What happens if Kwasi Abrokwa or Yaw Kusi-Appiah decides to bring vehicles of similar drives into the country? Will the government have the balls to confiscate the vehicles? I don’t think so. That will be hypocrisy at the highest order. One may argue that the president and the NPP are yet to find their feet and such initial mishaps are common. I will not buy into that but rather agree with the school of thought that believes that the NPP never believed that they would come to power. Thus, it came as a surprise to them when the NDC was voted out and power was thrust upon them. Whatever, the reason, I hope they find their feet very fast and avoid the bungling mess they are spewing around. The president should do well to let the people know and feel that he is in charge. Pronouncements by ministers and government officials should be consistent with government policies and objectives. Also errant ministers like AG Akuffo Addo should be censored and if they persist in repeating their mistakes, they should be fired.