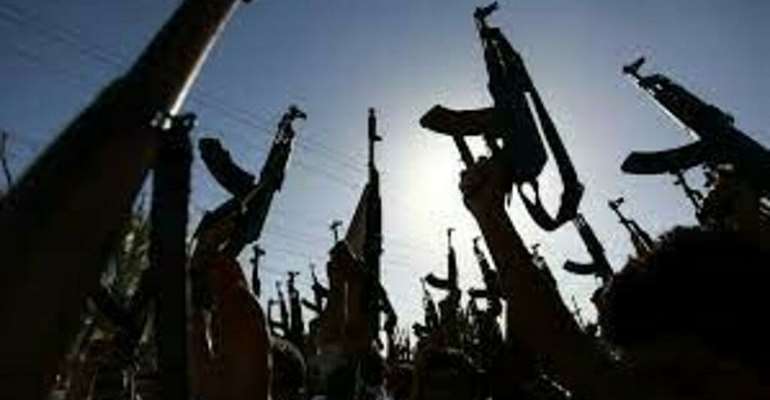 This past month – the fall of Kabul, the 20th anniversary of 9/11 atrocities and the historic Paris attacks trial – has been of time of deep emotional turbulence. Paris Perspective takes stock of these events by analysing the evolution of international jihad.

It was "nothing personal". That's what Salah Abdeslam, the main suspect of the 2015 massacres that slaughtered 130 people in Paris, told a French court this week.

Abdeslam was part of an Islamic State cell that carried out the gun and bomb attacks on bars, restaurants, the Bataclan concert hall and the Stade de France sports stadium on 13 November, six years ago.

He is believed to be the only surviving perpetrator.

The trial is a moment of reckoning for families of the victims and thousands of others caught up in the horrors of that night. Old wounds are being reopened, just as they were during the recent resumption of the 9/11 military trials in Guantanamo Bay.

Now, following the spectacular fall of Afghanistan to Taliban militants, world powers – rivals and allies alike – are fearing an spike in terrorist activity as jihadists across the globe celebrate the chaotic withdrawl of Western forces from Kabul.

Good for al-Qaeda, bad for ISIS

"Movements who belong to al-Qaeda or sympathisers of al-Qaeda were emboldened because they see this as proof that with patient, armed jihad – followed by negotiations – they can achieve what they want."

The return of the Taliban's Islamic Emirate rejuvenated al-Qaeda's central command and its affiliates. Things were different, however, for the Islamic State group, which lost its "caliphate" in the Levant and saw its leaders killed by international forces.

"Since day one of the creation of this [Islamic State] caliphate in 2014, [Al-Qaeda] considered it to be illegitimate," Nasr explains.

"I got to ask a few questions to a prominent leader of al-Qaeda in the Arabian Peninsula, and he was the first to tell me that since 2014, [Islamic State] were illegitimate and [Abu Bakr] al-Baghdadi was an imposter.

"So al-Qaeda is happy, and the Islamic State is not."

As a journalist and broadcaster Nasr keeps his ear to the ground, analysing social problems and reaching out to vulnerable youth in France's disadvantaged banlieus, or suburbs.

Disenfranchised people in these areas are prime targets for radicalisation by religious extremists who are master manipulators at recruiting often miserable youth looking to give their lives meaning.

Abdeslam has sought to use the Paris attacks trial as a pulpit of sorts, his microphone eventually being silenced by a judge. So how have his words been received in the suburbs, or so-called "quartiers difficiles"?

Nasr says they're nor paying much attention. "They're not following these trials. They don't feel concerned at all. That's what I sense," he says.

"On the other hand, from day one the media was looking out for what Abdeslam was going to say."

Given the marathon trial is set to last nine months, things could change, depending on what Abdeslam says or does not say, Nasr adds.

Since the 2015 attacks, France has been forced to take a hard look in the mirror to acknowledge the realities faced by its Muslim population and the ghettoisation of Muslim communities.

When it comes to political representation, however, not much has changed over the past six years.

Any talk of a Muslim vote as France gears up for the April 2022 presidential elections is nonsense, says Nasr. France is not like other countries, because Muslims either vote on the right or the left.

"If you talk about the banlieus, for example – what can be considered as 'the Muslim vote'? The majority vote for Jean-Luc Melanchon, who is far, far left," he says.

"But if you talk about [voter] participation or going to the polls, it is very low. Many people don't even bother to vote."

From the turmoil of the 2015 Paris massacres – and the subsequent "lone wolf" attacks across the country – the concept of Islam de France was born.

The idea is simple: A state-approved, inclusive interpretation of the Islamic faith in keeping with the norms of France's secular democracy to prevent radicalisation and promote integration.

But has this roadmap for the future of Islam and Muslims in France achieved much on the ground?

No, says Nasr – because the aim of Islam de France was never political. From the outset it was established to monitor extremist opinions coming from individual mosques or imams.

"French Islam didn't work out. It's still a project, but I don't know if it will work. Whenever a state gets involved in such issues, people usually don't follow," Nasr says.

While trying to bring the Islamic faith into the secular mainstream, if any Muslim anywhere in the world sees "islam.gov", it won't work.

Yet since Paris and other cities across Europe were struck by terrorist attacks, international jihadism has evolved – especially in response to massive global investment in security, surveillance and international cooperation.

All those who stand accused at the Paris tribunal were tracked down through technology. So what has changed from the perspective of the jihadists?

The 2001 and 2015 strikes on the US and Paris were exceptions. They involved putting crews together, training them, sending them to target countries, procuring weapons and making explosives.

In the years since, Nasr adds, it's been very hard to put together these sorts of teams and to find hardened fighters willing to return to their home countries and attack.

However the trend has evolved into something else.
"The Islamic State achieved what al-Qaeda could only dream of: managing to incite so many people to take up action. Terrorist actions in their own countries – either as citizens, residents or refugees," Nasr says.

"And this is the trend today ... it's less lethal than big attacks such as 9/11, but the political impact is still the same."

In monetary terms, the costly "terrorist spectaculars" of the past 20 years are mutating into cheaper operations with a commensurate "terror dividend", as illicit funding channels are shut down through the international forensic surveillance of accounts.

In the 2020s, terrorism is more cost-effective.
"It doesn't cost much. It's really easy to put together something like the attack on Kabul [airport]. It's one suicide attacker with one explosive belt," Nasr says.

"That doesn't cause much damage regarding the number of casualties. But we saw the panic that it caused – the shooting from the Taliban and from US forces – so there's the psychological impact."

Jihadist movements live on a micro-economy, accumulating small amounts of money over time to create a bigger kitty that allows them to conduct their low-cost, high-gain operations, Nasr adds.

Is the future biological?

Another potential evolutionary branch for terrorism is the composition, vector and delivery of weapons. Former British prime minister Tony Blair recently warned that the next wave of attacks was more likely to be of a biological nature rather than through traditional, physical assaults.

Is this how jihadists will subvert security measures in the future?

Nasr reckons Blair has a point, but the jihadists' development of chemical or biological weapons is limited. Both Al-Qaeda in Afghanistan and Islamic State in Iraq separately tried to develop chemical weapons.

"But they were very low-tech chemical weapons. And even when they are used, the casualties were very low," he says.

"But [Blair] was talking about the psychological impact. They are trying ... you can develop the weapon, but you then have to develop the ability to deliver it."

For the jihadists, it's one thing to develop biochemical weapons in a make-shift laboratory, but quite another to "put it on a plane and make it work".

So once the Paris tribunal on the 13 November attacks delivers its conclusions in nine months' time, what outcome can we expect, and how will the decisions impact the future of home-grown radicalisation in France?

For Nasr, justice will have run its course at least, unlike in the United States.

"To sum it up, France and European countries are doing what the United States didn't want to do – by judging terrorists in regular courts and not military courts."

This makes the judicial proceedings a public process, which is essential in a democracy.

The most important message from the United States – with the trials for Sheikh Mohammed in Guantanamo – is that it's a military trial.

"It's not the regular rules. It's not a regular court. Then on the other hand [over the past 20 years], Western powers are using drones to kill people. And this is extrajudicial," Nasr says.

Therein the paradox lies.
"When you have the opportunity to judge people in court – as a democracy – you should."

Wassim Nasr is a journalist, broadcaster and author based in Paris