Parents rush for wards at KNUST after order to vacate campus 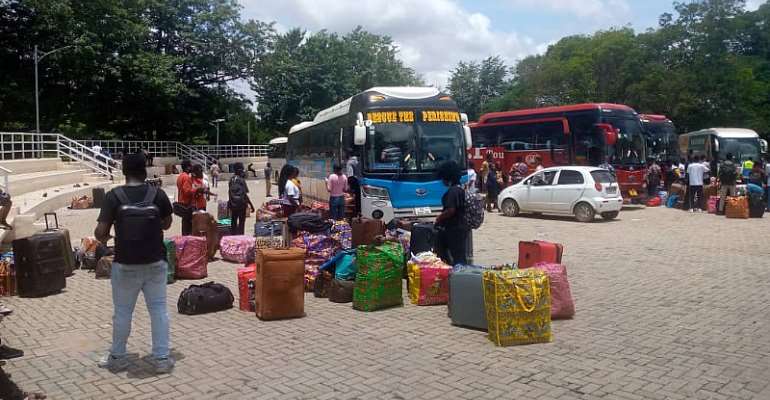 Some parents and guardians on Saturday September 18 reported to the Kwame Nkrumah University of Science and Technology (KNUST) to pick up their wards, following an order from the Ashanti Regional Security Council for students to vacate campus right after their end of semester exams.

The parents who were seen at the school’s campus on Saturday morning said they were worried after the order was given earlier this week.

The Ashanti Regional Coordinating Council directed students of the school, with the exception of foreign students and those granted permission by management, to vacate the school premises by midday on Friday, September 17, 2021.

According to the Security Council, it has picked up intelligence that some groups of unruly students are planning some disturbances on campus on the eve of vacation hence the directive.

A statement signed by the Ashanti Regional Minister, Simon Osei-Mensah noted that security personnel will be visibly stationed on the university campus to ensure peace and security and prevent any unruly behaviour by any group of students.

Some of the parents who interacted with Citi News called for permanent solutions to the issue of student group rivalries.

“We heard that some students want to demonstrate after their exams. We panicked about the news, so we called our ward, and he said everything was calm and that we should pick him on Saturday… About this Katanga and other hall issues, we have to call them and settle the matter once and for all because it happens all the time,” a parent said.

Another parent said he was surprised that such rivalry continues to exist on campus.

“I’ve learnt that they have to leave by a certain time as a result of the security situation. I have heard about the rivalry between the halls here and the last time, some people were injured. I was wondering why it should be repeated at this time. I was very worried,” he said.