French tightrope artist takes a hair-raising walk across the Seine 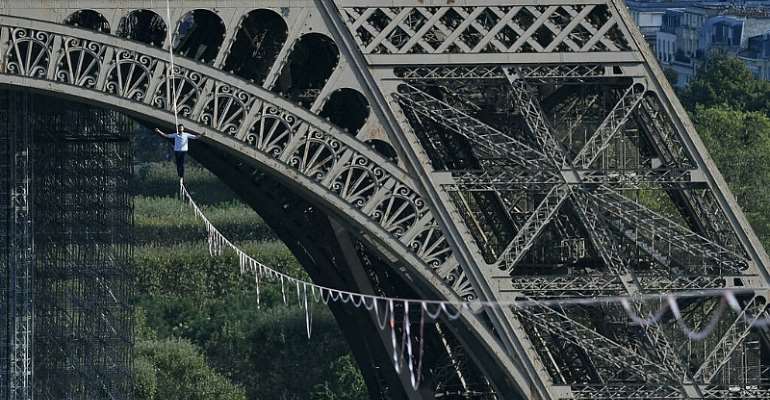 A French tightrope walker has crossed the river Seine in Paris - 70 metres up - in a breathtaking feat watched by cheering crowds on the Eiffel Tower and along the riverbanks.

Attached by a strap to a safety lanyard, 27-year-old Nathan Paulin slowly progressed barefoot on a line stretched across the river between the Eiffel Tower and the Chaillot Theatre.

He stopped for a few breaks, sitting or lying on the rope.

"It wasn't easy walking 600 metres, concentrating, with everything around, the pressure ... but it was still beautiful," he said after the performance on Saturday.

Obtaining the necessary authorisations had reportedly been a difficulty for him, plus "the stress linked to the audience, the fact that there are a lot of people".

Paulin, holder of several world records, performed the feat to celebrate France's annual Heritage Day - when people are invited to visit historic buildings and monuments that are usually closed to the public.

He said his motivation was "mainly to do something beautiful and to share it and also to bring a new perspective on heritage, it is to make heritage come alive".

He had already crossed the River Seine on a tightrope, on Heritage Day in 2017.

13 Nigerians who engaged Police in gun battle at Weija reman...
3 minutes ago