In Niger, nomadic herders gather in shadow of jihadist threat 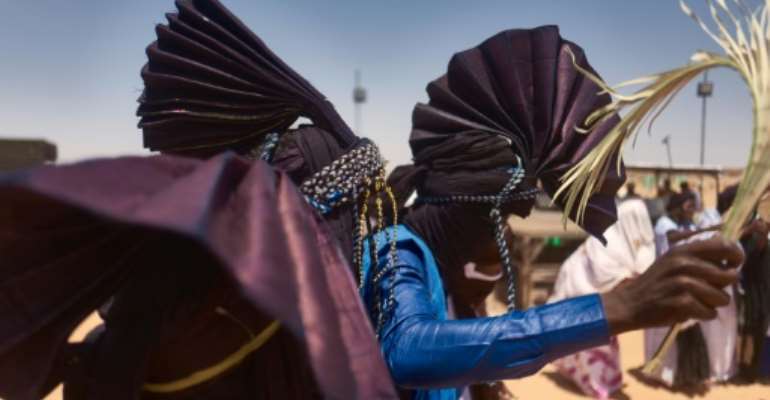 For most of the time, the tiny oasis town of Ingall has a population of just a few hundred. By Michele Cattani (AFP)

For three days, this semi-arid patch edging the Sahara desert blooms with a riot of colours -- red, orange, blue, fuschia -- as thousands of nomadic herders don their best dress for a festival celebrating their culture.

For most of the time, the tiny oasis town of Ingall has a population of just a few hundred. But once a year North Niger's traditional gateway to the Sahara, known for its salt flats, is the gathering point for the Cure Salee festival of Tuareg and Wodaabe pastoralists.

The festival which ends on Sunday marks the end of the rainy season, when herders bring their animals to graze -- and where they meet old friends, exchange news and reinforce cultural ties and traditions.

"Every year we come, we meet breeders from Zinder, Tahoua, Tilia, from all over Niger," says Banwo Marafa, 46, dressed in a purple polished-cotton robe topped by a long white turban.

"We've known each other for a long time. We get together every year with music and dance. It's a big party."

This year's is even bigger, he said, because last year's gathering was cancelled because of the coronavirus pandemic.

'Before we were free'

Further on, his nephew and about 50 other young people, all men, dance in a circle in the sand.

They sing about love and reunion in the Fulani language. Others look on, traditional sabres slung at their belts.

Everywhere, there is a festive energy.

But when people sit down under the canopies of their tents, the mood changes and faces which earlier lit up with laughter and smiles quickly turn serious.

The festival marks the end of the rainy season, when herders bring their animals to graze -- and where they meet old friends, exchange news and reinforce cultural ties and traditions . By Michele Cattani (AFP)

The revelry is only a brief interval in the lives of these herders. Lives that are only becoming tougher as the task of finding water and grazing for their animals becomes more difficult.

"Before, we were free. We used to take our herds everywhere," explains Assamou Malem, a local leader. "But for the past 50 years, problems have been piling up: lack of work, land problems, a lot of injustice."

In Niger, the world's worst-performing country in terms of the Human Development Index, the nomads have, as elsewhere in the Sahel, been ignored by policy makers since independence in 1960.

And after several Tuareg rebellions in Mali and Niger, Sahelian nomads were the first to be recruited by jihadist groups, Al-Qaeda and Islamic State.

These groups are established in Mali, Burkina Faso and the neighbouring regions of Niger, but not yet here.

Herders' lives are only becoming tougher as the task of finding water and grazing for their animals becomes more difficult . By Michele Cattani (AFP)

But this immense desert north of Niger, already a land of trafficking and illegal migration, "is perceived by the terrorists as the territory they are destined to gradually occupy", President Mohamed Bazoum warned on Friday at the opening of a forum in Ingall bringing together the state and traditional chiefs.

He said we must be prepared "to be armed to face the claims of these two groups".

General Mahamadou Abou Tarka, who heads the powerful High Authority for the Consolidation of Peace, also warned against "small conflicts" between communities that lead to large-scale violence.

At the 2021 festival, NGO awareness-raising stands line up in a long line, armoured vehicles guard the entrance to the VIP area, and a surveillance drone, probably from a nearby American airbase, flies through the blue sky overhead.

The revelry is only a brief interval in the lives of these herders.. By Michele Cattani (AFP)

But of all the people interviewed by AFP, no-one apart from President Bazoum would openly talk about the jihadist threat to the region.

"We must not wait until the fire is there to put it out," the president of the Regional Council of Agadez, Mohamed Anacko, said obliquely.

Away from the building housing the forum, the event nevertheless has the air of a festival like any other -- except that it takes place in the Sahara.

There are the Quechua camping tents of the herders (preferred to the traditional tents for the duration of the festival); a group of Russian tourists; the concert by the Tuareg star Bombino.

Only Niger's President Bazoum will talk openly talk about the jihadist threat to the region. By Michele Cattani (AFP)

Someone has installed a sound system and makes those who pass by dance.

Meanwhile a group of young Fulani Wodaabe have gathered around one of their number who is being made up for a ceremony.

"It was better before," says another group leader, anonymously railing against the "politicisation" of the festival by the authorities.

"Originally it was an event of nomads for nomads," he says. "We simply celebrated."