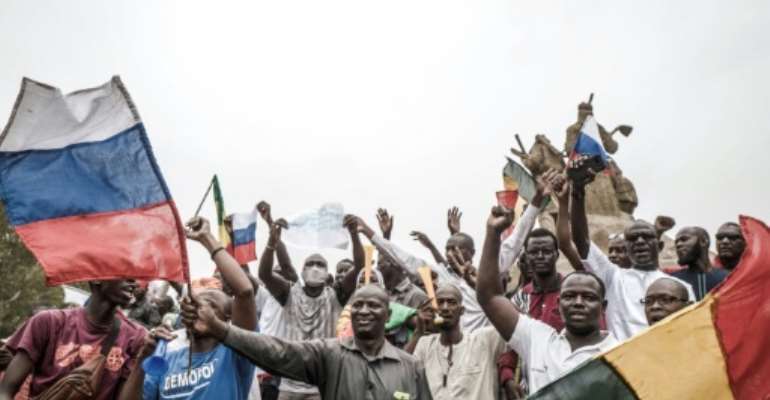 Russian and Malian flags are waved by protesters in Bamako, during a demonstration against French influence in the country on May 27, 2021. By Michele Cattani (AFP)

A possible partnership between the government of Mali and the Russian private security company Wagner should fully "respect human rights and international law" if it comes to pass, a senior UN official said Friday.

Asked at a press conference about the possible impact of a deployment of Russian paramilitary contractors on the 15,000-strong UN peacekeeping mission, Jean-Pierre Lacroix, the UN Under-Secretary-General for Peace Operations, said he had seen no final agreement on the subject.

"As UN, we do not interfere in sovereign prerogatives," he said.

"It's important for us to be able to continue delivering our mandate with the full support of the host government, with the full cooperation and coordination with the local armed forces, without obstacle, without access denial, without threat," he added.

"It's also critical that any partnership be carried out in full respect for human rights and international humanitarian law," he said.

"Our missions are mandated to report on human rights and humanitarian law," said the UN official. "We expect from our host governments, host countries that they bear that in mind when they engage in a bilateral partnership."

France and Germany have warned they will reconsider their military engagement in Mali if a contract is struck between the Malian government and the controversial Wagner company, already present in several other African countries.

In the Central African Republic, the UN accused members of this paramilitary company, which is reputed to be close to President Vladimir Putin, of committing abuses early this summer -- though the number of those accusations has gone down, a UN official told AFP this week.

Russia has denied negotiating a military presence in Mali. According to a French source familiar with the matter, the junta in power in Bamako is nevertheless studying the possibility of a contract with Wagner on the deployment of a thousand Russian paramilitaries, to train the country's armed forces and ensure the protection of its leaders.

Questioned by AFP, the Malian defense ministry admitted to conducting talks with the Russian company.

Take me to court, I will get the court to also overturn the ...
49 minutes ago

We’ve revamped TVET education in Ghana than any government –...
49 minutes ago