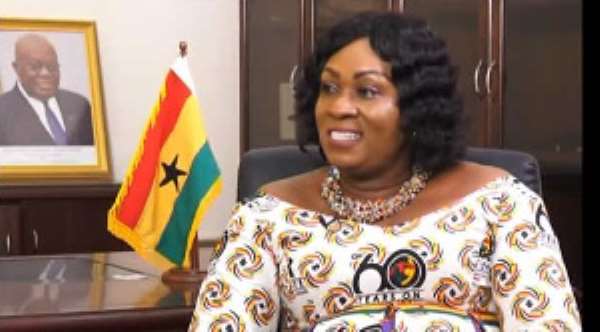 It was a widely anticipated vetting and by no means did it disappoint. Midway through the ministerial scrutiny, there were calls for her knock-back. Most media observers and bloggers were united with one voice; she must be rejected by the Appointments Committee. Her halting English, her countenance, her lack of knowledge of the workings of the sector to which she was being “posted”, and other responses at the vetting were the major talking points. Opinions from the political divide were not varied this time, the verdict was straightforward - Hawa Koomson is not competent enough to hold the title Minister for Fisheries and Aquaculture Development.

Two tweets among the lots caught my attention. @RexKwasiDanquah: "Vetting is an interview for a job to assess your competence. Hawa Koomson should be frank with herself if a fresh graduate appears at her ministry and performs exactly how she’s doing now, would she hire the young graduate? We all know the answer. I wish her well though.”

@CoachOpeele: “I am not a fan of Hon. Hawa Koomson over her Rambo style approach and also understand people’s criticism of her vetting performance so far but if we only need elites to be ministers then we must as well allow only the well-educated elites to vote in our society. Let’s be fair.”

The latter prevailed. The concerns of Ghanaians were justified though because thrusting such an important ministry into the hands of a “green horn” can most definitely dent the economy. Let’s not forget that statistics show the fisheries sector generates over US$1 billion in revenue each year and accounts for at least 4.5% of Ghana’s Gross Domestic Product. The sector also plays a major role in sustainable livelihoods and poverty reduction in several households and communities.

Whether failure becomes a stepping-stone or a stumbling block depends on how you handle it. With all fairness, Hawa Koomson has performed creditably, less than one year into office. Two main issues among the lot always define the success of the Fisheries and the Aquaculture Development Ministry. That is, handling of closed fishing season and supply of premix fuel to the fisher folks.

In contemporary development practice, there is a general feeling that the process of development through the implementation of projects and programs will only acquire full meaning if the local population participates fully in their planning and implementation. As such, contemporary development scholars and practitioners have been advocating for the inclusion of local people's participation in development practices. For the first time in many years, the 2021 Close Fishing Season was audibly devoid of the usual acrimony associated with mainly due to the extensive stakeholder engagement and local consultations initiated by the ministry.

Indeed there was high compliance in all fishing communities. The few recalcitrant ones who defied the ban were swiftly dealt with - a new face of humane law enforcement.

Knowing full well the hardship associated with the “close season”, efforts were made to support the coastal communities. The distribution of food items came as a timely and welcome relief to these families.

My interaction with some fisher folks across the coast confirmed the distribution of food items was not based on party colours hitherto a common feature. In as much as this is laudable, measures must be put in place early so that we don’t get to the close season before taking such decisions. There should be more engagements to compile a reliable database of people living in such communities and their wants.

The supply of subsidized premix fuel has always been a thorny issue. The Ministry through the Premix Fuel Secretariat supplied over Fifty-Two Million liters of Premix Fuel between January and June 2021. The so-called operation of the "Premix cartel" was reduced in the first half of this year. The measures put in place by the National Premix Secretariat must be supported in the coming years to effectively cut out all illegal activities associated with it. Access to reliable data is therefore crucial for the success of this exercise. The digitization drive to register all fishermen for an effective supply of premix fuel must be hastened. With a proper monitoring mechanism, corruption associated with the distribution might no longer exist.

Bad leadership from time immemorial has been the bane of development and thus when good leadership is exhibited especially after initial concerns were raised about someone’s competence, it’s important to acknowledge the positives when they are visible for all to see. The approach of extensive engagements with all stakeholders in decision-making is the way forward. The vilified, scorned, and mocked Hawa Koomson is leading the way - probably with a V sign, for victory.

The Writer is a Media Monitor with research interests in Presidential Rhetoric, Development Communication and New Media Technology.