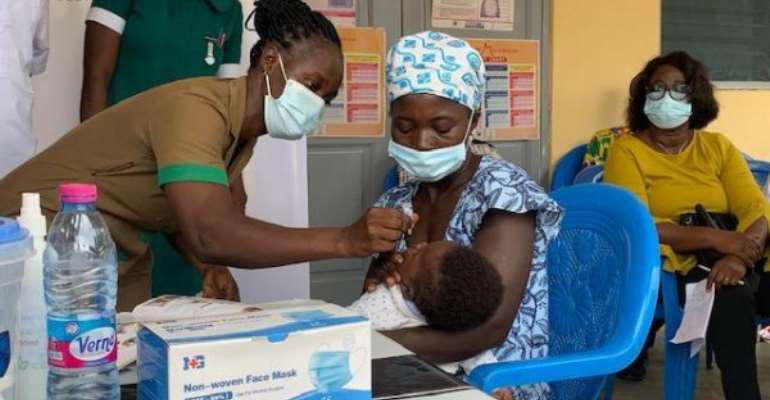 About 30 rural health facilities in energy poor communities in the Afram Plains of the Eastern Region will by early 2022 benefit from two-kilowatt power standalone photovoltaic (PV) system valued at about Euros 300,000.

Already, 11 of the 30 communities, including Kwasie Addae, Praprababida, Koranteng Kranchie, Dim-Sakabo and Anidzi have had their Community Health Planning Service (CHPS) compound fitted with solar power while work is ongoing to complete the rest of the communities.

The provision of electricity to the facilities will enable health officers to provide 24-hour service to patients, especially expectant mothers and children.

The two-kilowatt solar PV system, which has six panels, has the capacity to power a fridge to store essential vaccines for children, charge mobile phones, bulbs, fan and television at the health facilities.

The initiative is being implemented by the GIZ-Green People's Energy Sector Project, with funding from the German Federal Ministry for Economic Cooperation and Development.

Mr Rafael Wiese, the Project Manager of Green People's Energy, said this during a visit by the steering committee members to Kwesi Addae, one of the beneficiary communities in the Kwahu Afram Plains South of the Eastern Region.

He explained that the goal of the project was to improve the conditions of using renewable energy in rural areas and that it was also in line with Ghana's climate change Nationally Determined Contribution under the Paris Agreement.

Mr Wiese said the project was providing technical training to the Ghana Health Service technical officers to enable them service the facilities.

The Project Manager mentioned that another aspect of Green People's Energy project would focus on supporting farmers to acquire solar powered irrigation facilities to ensure all year round farming and build their resilient to changing climatic conditions.

Mr Richard Essien, the District Health Director of the Kwahu Afram Plains South, noted that the area was one of the most deprived in the region due to challenges in accessing the district, scattered populations, riverine communities and lack of some basic amenities.

He said solar power would contribute towards the achievement of Sustainable Development Goals on affordable and clean energy as well as good health and wellbeing.

The Director noted that, “Electricity is a key requirement in the delivery of quality healthcare now than before in storing vaccines for routine immunisation services and the Covid-19 vaccination exercise as well as ice packs to relieve pain, swelling, and inflammation from injuries”.

He said through the project, Dim Sakabo CHPS was now able to operate an ultrasound scan machine and had helped improve maternal health service in totality.

Mr Michael Dzahene, a Midwife at Dim-Sakabo, speaking in an interview with the Ghana News Agency, said the challenge of conducting deliveries with touch light in the night had been addressed.

“We were doing deliveries in the dark before the solar was installed. There were occasions where we had to painfully refer emergency delivery cases to other facilities due to lack of light,” he said.

He said both deliveries and Out Patient's Department cases had increased from 15 to 35 a day.

Madam Kate Korang, a mother of five and resident of Akwesi Addea Community, said the light at the facility had given her children and others the opportunity to learn at night.

She said the community members, aside from accessing medical care at any time, could charge their mobile phones at the facility.

The steering committee members who visited the community, include officials from Abantu Development, Ghana Health Service, Ghana Irrigation Authority and the Renewable Energy Association of Ghana.

Government's policy is aiming at scaling-up renewable energy penetration by 10 per cent by the year 2030 through increased private sector partnerships.

Ghana's nuclear power programme is also scheduled to come on stream by the year 2030 to provide low-emission energy to meet the country's commitment under the Paris Agreement.

‘You can’t beat NDC in spreading lies, falsehood and propaga...
24 minutes ago