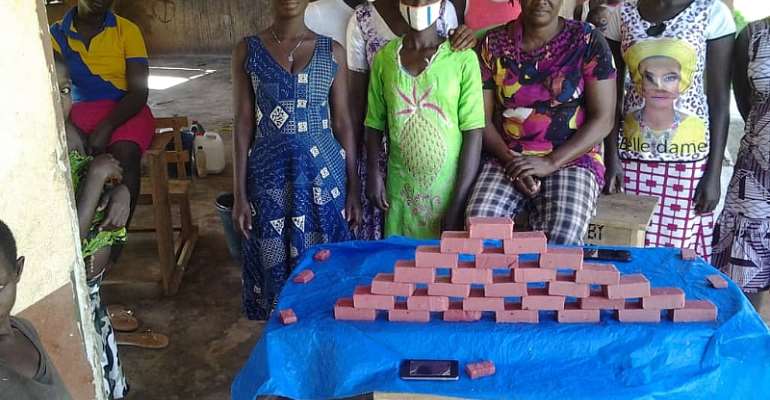 Paulina and Pona amongst community members showcasing some of their products

Paulina Lanjado from Montanaya in the Nanumba South District of the Northern Region was 10 years when she dropped out of school. At the time, she was in class four. Paulina was young when her mother died. Her father too has not been well. Surviving as a child and without any support, things became tough for Paulina and she struggled to make ends meet. In the process, she became pregnant and she is now mother of one at age 18.

In 2020, she heard about a project, which sought to train young vulnerable girls in vocational skills. She expressed interest in the training and was selected as a beneficiary. As part of the training, she learnt soap making for six months after which, in May, 2021, she was given start-up kits such as quantities of chemicals for making bar soap and liquid soap, cutting boards for bar soap, and hydrometers to start making her own soap to sell.

In June, 2021, she put her newly acquired skills to practice and produced soap, which was well patronised by members of her community. She said that marked the beginning of a change in her life for the better. She said she was enjoying her new business, and planned to become a big player in soap production in her community within the next two years. Another young lady, Pona Ngemabi, a 20-year-old mother of one from Knyinkpa in the Kpandai District of the Northern Region, did not go to school because of financial challenges. Life was very tough for her and her situation was further compounded by the fact that she did not have any means of earning income. Pona, just like Paulina, also heard about a vocational skills training project where some vulnerable females in her community were being selected as beneficiaries.

She joined and learnt sandals making. After six months of undergoing the intensive training, she was given start-up kits such as different kinds of beads, needles, sandals, and pliers in May, 2021 to start her business as sandals maker. In June, 2021, she made 10 sandals and sold them in her community. She said this marked a turning point in her life. Her plan now is to expand her business and own stores in the Kpandai Market to sell her sandals. Paulina and Pona were not the only vulnerable girls in the Nanumba South and Kpandai Districts, who had had their life situations changed for the better. A total of 554 others in the two districts were also trained in various vocations and given start-up kits to set up their own businesses as part of a project dubbed: Strategic Approaches to Girls’ Education (STAGE), and they are making good use of their newly acquired skills.

In the Nanumba South and Kpandai Districts, there are high levels of extreme poverty, and deep-seated traditional and social norms exist towards gender roles, including early marriage, teenage pregnancies, and high chore burden. The Poverty Mapping Report released by the Ghana Statistical Service in May, 2015, stated that 76.9 per cent of the people in the Kpandai District representing 82,712 persons were poor while 17.6% of the people in the Nanumba South District representing 30,569 persons were also poor. The result is a negative impact on girls’ ability to progress in education and gain decent employment. Girls in these two districts have limited voice within the community, exacerbating these problems. Subsistence agriculture is the mainstay of residents and many families struggle to meet basic needs, let alone invest in their children’s education. It is against this backdrop that the STAGE project was initiated. The STAGE project, which began in 2018 and will end in July, 2022, is implemented by the Regional Advisory Information and Network System (RAINS), a non-governmental organisation, in partnership and in a consortium led by World Education Inc and funded by the United Kingdom’s Foreign Commonwealth and Development Office. The project consists of two tracks for highly marginalised girls – a formal track for girls aged 10-14, and non-formal track for girls aged 15-19, who are transitioned into employment after six months of literacy, numeracy and vocational skills. A total of 554 girls have graduated from the first cohort and 701 girls of the second cohort are in advance stages of their journey to literacy and employment. A third and last cohort will feature a total of 682 girls to benefit from the project. In all, 1,937 girls will benefit from the project in 75 communities across the two districts.

The STAGE project so far

So far, a total of 554 girls in the two districts have undergone six months of accelerated learning on literacy and numeracy together with life skills training as first cohort beneficiaries and have been supported to transition into the world of work. They were given start-up kits comprising of assorted combs, assorted hair extensions, scissors, hair food (for hairdressers), different kinds of beads, needles, sandals, pliers, fishing lines (for beads makers), chemicals for making bar soap and liquid soap, cutting boards for bar soap, hydrometers amongst others (for soap producers) to start their own businesses. Also, a total 701 girls being beneficiaries under the second cohort of the project have undergone various vocational skills training in the areas of soap production, sandals making, hairdressing, and beads making in the two districts to equip them with self-employable skills.

Key STAGE stakeholders, at a recent engagement at Wulensi in the Nanumba South District, shared their observations and expectations of the STAGE project. The engagement was aimed at bringing on board district level structures for the purposes of sustainability even after the project’s lifespan in the two districts, discuss challenges on the field and solicit support for the project especially through ongoing interventions at the district assembly.

Mr Zakaria Tahiru, Deputy Coordinating Director at the Nanumba South District lauded the STAGE project and said the high numbers of girls benefiting from it showed that the Assembly had moved forward in terms of creating economic opportunities for its people.

Mr Tahiru said the project was what the girls needed to empower them to have strong voice in society as well as earn decent incomes to take care of themselves and their dependants.

Mr Yaw Sarfo, Nanumba South District Director of Education commended RAINS and partners for implementing the project in the area and said the vocational and life skills being imparted onto the girls would go a long way to positively impact their lives.

Mr Sarfo suggested the need to also introduce the beneficiaries to agricultural investment opportunities such as production of onions and tomatoes, which were in high demand in the area, to supplement their income streams.

Mr Bruce Hammond, Nanumba South District Director of Social Welfare and Community Development expressed need to link the STAGE project with interventions of other NGOs and existing structures at the local level to make them sustainable and more impactful.

For any good intervention, there is bound to be challenges and the STAGE project is not an exception. Few selected beneficiaries on the first track have dropped out. This means they may not gain any opportunity again to acquire employable skills. It has also been observed that some beneficiaries, who acquired vocational skills, sometimes find it difficult to get raw materials to practise their skills. Raw materials used to produce soap and sandals are not readily available in shops at the two districts. Beneficiaries rely on people, who travel to city centres such as Tamale to buy such materials for them, and this sometimes takes a toll on their work.

In this era of global competitiveness, without formal education, and sound vocational and technical skills, one cannot make ends meet, let alone be assertive in society. Not only has the STAGE project come to secure the future of girls in the two districts but also to break the barriers of marginalisation against them. There is the need for all stakeholders in the two districts and the country at large to support the project to succeed. All the beneficiaries should see the project as their last hope and be serious about its approaches to transform their lives for the better. This way, the country will be on the right path to addressing issues of violence and marginalisation against girls thereby empowering them to take their rightful places in society.