China losing battle to sell its 'win-win' deals to Congolese 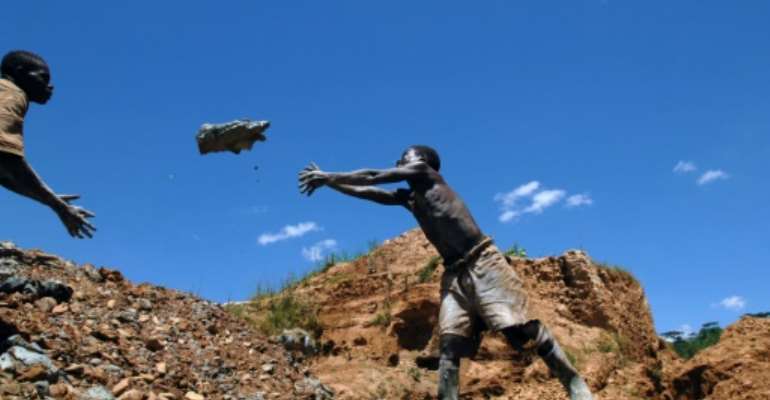 The vital resources sector is a source of growing tension between Kinshasa and Beijing. By LIONEL HEALING (AFP)

Much has ground to a halt during the coronavirus pandemic, but not the march of Sino-Congolese friendship. Or so the Chinese embassy in Kinshasha is keen to show, amid growing scrutiny of Beijing's activities in the mineral-rich nation.

On the Boulevard Triomphal in Kinshasa, opposite the People's Palace, work is still under way on the gigantic future Central African Cultural and Arts Centre -- a fact that the Chinese embassy took to social media to highlight.

"The Covid-19 pandemic has stopped many things, but not the construction" of this China-funded centre, "a new symbol of Chinese-Congolese cooperation", the embassy tweeted on Thursday, with photos to back it up.

For several weeks, China's diplomats have been responding to the wave of government decisions and positions seen as hostile to China's very visible presence in the DRC, to negative publicity about its operations in the crucial mining sector, as well as to criticism about failure to follow through on its commitments.

The marked change in tone was set in May when Tshisekedi announced his intention to review what he says are badly negotiated mining contracts agreed by Kabila.

Kabila was in power from 2001 to early 2019, but his influence only really disappeared two years later, when Tshisekedi ended a cumbersome coalition agreement.

"It is not normal that those with whom the country has signed exploitation contracts get rich while our people remain poor," he said in May.

The DRC's enormous mineral reserves are critical to global supplies of lithium and cobalt, used in cell batteries and electric vehicles, tantalum, tin and gold in electronic devices, and copper for power lines and uranium.

Yet despite the huge trove of wealth, 73 percent of the nation's 80 million people lived on less than $1.90 a day, the World Bank estimated in 2018. The impact of the coronavirus is believed to have made the situation even worse.

With Chinese companies the dominant players in DR Congo's resources sector, many saw Tshisekedi's remarks as heralding a showdown with Beijing, just as Kinshasa was drawing closer to Washington.

Others, however, see the move as more of a negotiating tactic.

In August, the US agreed a $1.6 billion package of aid for the DRC aimed at strengthening public institutions, improving access to water and electricity, and promoting small businesses and agriculture.

China, on the other hand, has long been criticised for attaching strings to its aid for developing nations.

In the wake of the presidential speech, announcements have accelerated since early August.

In particular, Tshisekedi ordered a review of the shareholding of state-owned mining company Gecamines in a major copper and cobalt deposit majority owned by Hong Kong-listed China Molybdenum.

A commission will assess the extent of Tenke Fungurume Mining's reserves to allow the state to regain a fair share of its rights, the government has said.

Even more dramatically, Tshisekedi called for a review of the 2008 deal under which China secured rights to crucial minerals including cobalt and copper in return for building infrastructure.

After years of delays, complaints over poor quality and environmental and rights impacts, it seems the Congolese government believes the deal hasn't lived up to its promise.

Chinese Ministry of Foreign Affairs spokesman Zhao Lijian has defended the "strategic partnership", which he said has made it possible to promote "the development of the local mining industry, contribute to the financing of local communities and develop employment".

But China's words appear to hold little sway with Congolese public opinion, which seems increasingly inclined to listen to criticism from on the ground where Chinese firms are operating.

The governor of South Kivu has suspended the gold mining activities of Chinese companies which, he said, do not respect the rules of the mining code, the environment or human rights -- China's embassy has vowed to crack down on such abuses.

A documentary accusing China of colonising the DRC has also added to the problem.

In the film, 2018 Nobel Peace Prize laureate Denis Mukwege likens the behaviour of the Chinese to local workers "a form of slavery".