The Inevitability of Guinea’s Coup 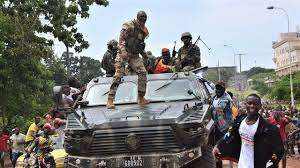 The Political expedience of this coup in a 21st century, where civilization has achieved a milestone may put wrinkles on many faces since this singular action jeopardizes the dictates of Democratic Governance some may argue. African leaders have been rather sadly known to cling onto the ropes of power mindless of the dire consequences of the loss of lives just to satisfy their selfish and parochial interest.

Now, let’s situate this argument into proper perspective to delve into the issues. Let’s begin by reminding ourselves of the very dictates of Democratic Governance. The Declaration of Independence by Abraham Lincoln, the first US President at the Gettysburg Address, November 19, 1863, had it stipulated that “Government of the people, by the people and for the people “. This statement is quoted in many Democracies around the world which symbolizes Liberty. Guinea’s coup was a time bomb, a looming disaster world leaders sat aloof and watched on the fence. The country is rich in natural resources yet is plagued with poverty and worse living conditions ever. Corruption has infested the country like a worm. Alpha Conde presided over a country where living conditions were dire and poverty prevalent and daily suffrage of the people was not enough testimony for world leaders? Where was the so-called preachers of Democratic Governance when Alpha Conde altered the Constitution to run for a 3rd term in Government with utmost disregard and to the neglect of all the agitations of the people of Guinea.

Where was Ecowas and its Chairman? Majority of people in Guinea today second the coup and are behind the Military that ousted the President. So, if by definitive terms of Democracy, Government is by the people, of the people and for the people, then by estimation, this legitimizes the coup d’etat. The African Political landscape favors the rich and facilitates a cycle where the rich continues to be richer and the poor, poorer because you see, unfortunately vote buying continues to show its ugly face in African politics to the disadvantage of very intellectual prospective leaders who may lack the luxury of such resources to throw about seeking leadership to political positions. When the big weights dissipate wealth in vote buying during political seasons to literally acquire positions, it should be however noted and expected that they would do anything to recoup wealth or resources and even make a profit from it by either hook or crook when elected into office yet, these are the same leaders Africa expects to fight corruption? Political contest within the context of the African continent is all about money. If you cannot afford to ‘buy off’ delegates who auction their votes out to the highest bidder, then forget about venturing into the realms of politics. Where does this leave Africa? Frankly, I’m no Prophet of doom neither am I a Naysayer, but the current happenings in Guinea might trigger similar situations in other countries where Governance is reduced to corruption and favoritism and gross nepotism.

The African voter is getting emancipated and educated every now and then about politics and is indeed becoming fully abreast with the power of the thumbprint and is beginning to demand more of politically elected officials and holding them accountable for promises made on campaign platforms. Sadly, economic hardships created by Governments in Africa is the reason why many would sell off their vote or franchise for a loaf of bread just to feed their families. Having been so empowered with the thumbprint, hunger and hardship makes many settles for mediocrity. It might take a long while but when the masses are taken for granted for far too long, in terms of economic hardships, Graduate youth unemployment, inflation skyrocketing, poor health care system, immortorable roads amongst many others, then yes, many more coups should be expected in the days coming ahead unless a swift intervention is implored. Again sadly, it would take decades upon decades before such bright days are witnessed. I end here by reposing confidence in Dr. Martin Luther King as he once opined that, “I might not get there with you, but we as a people will get there someday.”