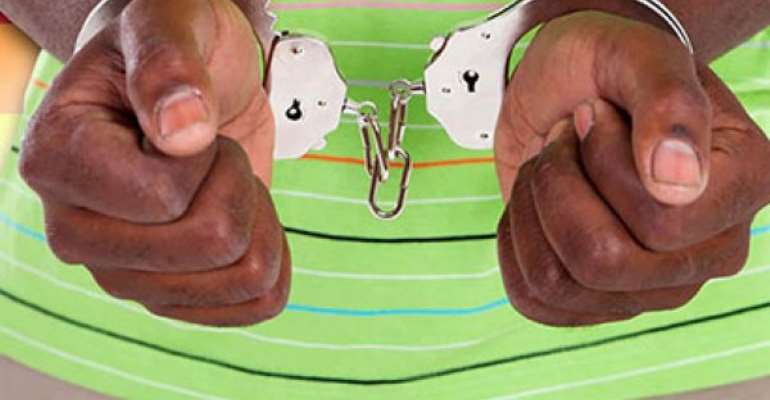 The Achimota Police have arrested Evans Arhinful, age 31, for allegedly intoxicating a taxi driver at Achimota and making away with his cab.

A statement signed by Deputy Superintendent of Police (DSP) Juliana Obeng, the Head of Public Affairs Unit, Greater Accra Regional Police Command, and copied the Ghana News Agency, said on Wednesday, July 7, 2021, at about 1830 hours, the victim picked up a passenger from Shiashi to a hospital near Achimota.

It said upon arrival at the hospital, the passenger asked the driver to wait for a while as he attended to a friend on admission.

The suspect then offered the driver a drink whilst he waited for him, the statement said.

It said unknown to the driver, the drink had been spiced with an intoxicating substance and just after some minutes of taking it, he became unconscious.

When the driver finally woke up from sleep, his vehicle, a Chevrolet Aveo with registration number GE 9457-21, had been taken away.

The statement said after all efforts to locate the whereabouts of the vehicle yielded no results, the case was reported to the police.

It said after weeks of investigations, the police identified Evans Arhinful as the culprit, who intoxicated and stole the taxicab at Achimota.

“His activities were closely monitored and he was apprehended at Koforidua-Effiduase when he attempted using the same mode of operation to steal another vehicle,” it said.

“The suspect was brought to the Achimota Police. Investigation into the case is still ongoing and he shall be arraigned before court soon,” the statement said.

It advised citizens not to accept gifts, wrapped or unwrapped from strangers, regardless of their appearance.

“Under no circumstance must you consume water, food or drinks offered by people you do not know. Avoid long discussions on the phone when in public transport or standing at bus stops. Stay vigilant at all times,” it said.

It urged parents, teachers and guardians to teach their children to avoid talking to strangers and leave when approached by strangers, no matter how nice and friendly the stranger may look.

“Shout 'NO' and refuse treats (eg: sweets and toys) and free rides from strangers,” the statement said.

“On the note that security is a shared responsibility, the police encourage the timely report of suspicious characters, or movements, of security interests, happening around you to the police. The police can be contacted on Toll-Free numbers 18555 and 191.”