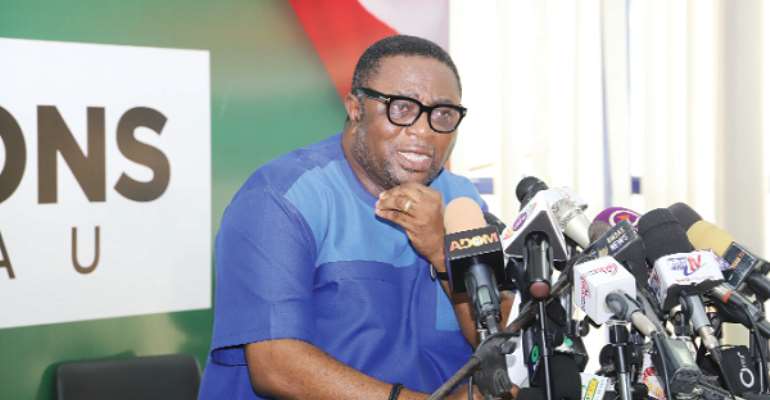 The Director of Elections for the National Democratic Congress, Elvis Afriyie-Ankrah has denied reports that polling agents of the party would be handed weapons and bulletproof vests on election day.

He describes the report as false and must be treated with contempt.

“I wish to state emphatically and categorically that that attribution is completely false, and must be treated with the contempt it deserves,” he noted.

The NDC stalwart noted that he was arranging to get the full unedited interview for all to listen to.

This follows Daily Guide Newspaper publication that, “National Democratic Congress (NDC) has revealed that going forward, it would be compelled by circumstances to arm its polling agents with bulletproof vests and other ammunitions to fight oppressors and also resist illegalities from so-called security operatives on the election day.

“The decision, according to the party’s Director of Elections, Elvis Afriyie Ankrah stems from lessons learnt by the party from the 2020 general elections which was characterized by pockets of violence, resulting in the death of eight persons.

“Going forward, we have learnt lessons and maybe we have to give bulletproof vests and guns to our people to defend themselves at the collation centres. Nobody is going to allow what happened in Tachiman South to happen again”, he revealed on Kumasi-based Orange FM,” the paper quoted Mr. Afriyie-Ankrah.

“My attention has been drawn to a story circulating widely on Social Media, in which I am quoted to have said that the “NDC is to arm its 2024 Polling Agents with Bulletproof Vests, Guns…”

I wish to state emphatically and categorically that that attribution is completely false, and must be treated with the contempt it deserves.

I am arranging to get the full unedited version of the interview so the entire world would hear exactly what I said, and expose the perfidy of the publishers.