Ho: One in critical condition, four others injured as truck suffers brake failure 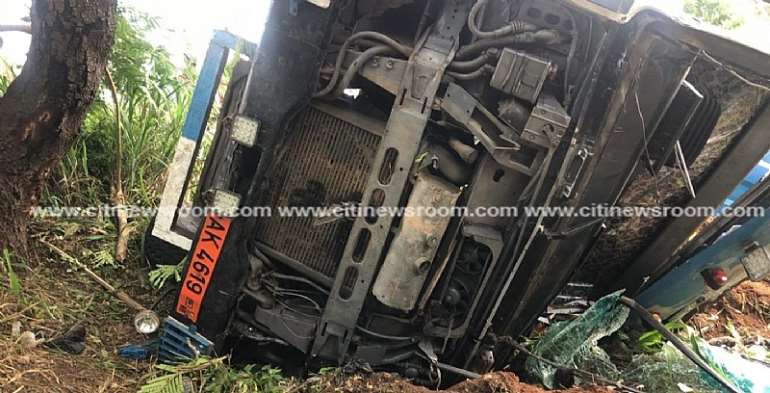 One person is in critical condition with four others sustained varying degrees of injury after a truck loaded with assorted drinks suffered brake failure at Ho in the Volta Region and somersaulted into a farm.

The occupants were travelling to Accra from Nigeria when the brake of the vehicle, with registration number AL-9245 RB, failed while the driver was descending a hill.

According to eyewitnesses, the driver of the vehicle couldn’t control the truck while negotiating a curve right after the hill, somersaulted several times and ended up on a farm along the road.

“We met the driver of the truck trapped when we got here. So we quickly pulled out his body from the vehicle and handed him over to the ambulance service personnel. There were five persons on the truck. The driver is in critical condition.”

“The information we are getting is that the truck is from Nigeria. When it got here, it realized that it was going on top speed, but it was too late to salvage the situation.”

He said the driver of the truck was rushed to the Ho Teaching hospital, while the rest of the crew were screened and discharged by the staff manning the ambulance vehicle because they had minor injuries.

Akufo-Addo, Paul Kigame, others to address YouthConnekt Afri...
14 minutes ago

I'm sorry, was running away from a prophecy that I'll be sho...
14 minutes ago