RFI Exclusive: At home with space odyssey Thomas Pesquet aboard the ISS 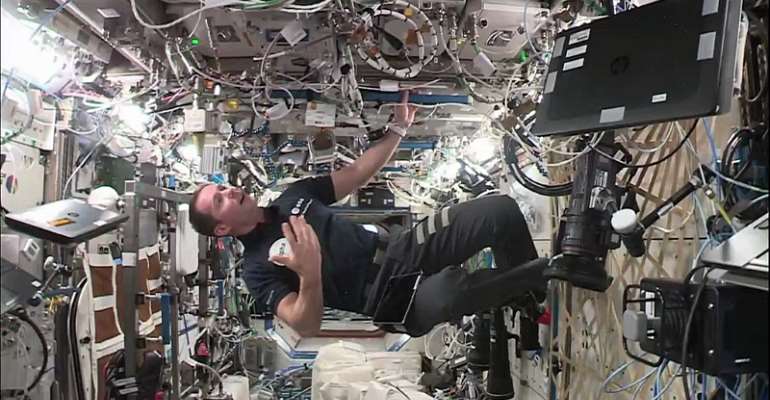 There's never a dull day aboard the International Space Station (ISS), where Frenchman Thomas Pesquet this week chalked up the longest time spent spacewalking by a European astronaut. Although his main gig is microgravity science experiments, the 43-year-old has also been busy taking stunning photos of Earth – and finding time to fire off a message of support for the amateur crew aboard SpaceX's first commercial flight, which slung into orbit Wednesday.

"No matter if you're a professional or not, when you get strapped to a rocket and launch into space, we have something in common. All the very best from, well, space,” Pesquet tweeted as the crew of four – led by billionaire Jared Isaacman – blasted off from Cape Canaveral.

While Elon Musk's SpaceX and other billionaire ventures have the Moon, Mars and beyond in their sights, the Alpha Mission crew aboard the ISS are a little more grounded – keeping busy managing a conveyer belt of experimental samples – things like fruit flies, plants, seeds, blood, urine and hair.

The team must also maintain and repair the equipment that makes those experiments possible.

Logbook updates
Now two-thirds of the way through his six-month mission, Pesquet has been giving RFI and sister station France 24 logbook updates of what life is like aboard the ISS, as it quietly circles the Earth at an altitude of 432 kilometres.

“We have laptop computers hanging all over the place … things on the ceiling too ... there's something just about everywhere,” Pesquet said Monday, pointing beneath him to a part of the ISS that houses equipment to “filter out the C02”.

Every morning there's a conference with ground control to lay out the agenda of the day.

“The equipment helps us access our procedures and documents sent to us by the control centre … I even keep a laptop strapped to my thigh,” Pesquet adds.

'Game of Tetris'
Gesturing above at what appears to be a labyrinth of wires and circuit boards, Pesquet introduces what the team calls “an express rack” – blocks of interchangeable modules that he tells us are in fact fridges, freezers and other containers of experiments that are received from and sent back to Earth.

“I admit I don't know exactly what some of the experiments do,” the aerospace engineer and pilot admits. “It's a bit like a game of Tetris, getting the new ones set up and sending the completed ones back to the ground.”

Pesquet is particularly fond of an experiment on “super cold atoms” that are close to zero degrees Kelvin (minus 273 degrees Celsius) – the point at which particles stop moving and all disorder disappears. Nothing can be colder than absolute zero on the Kelvin scale.

Also in the same room is an exercise bike, because even in zero gravity it's important to keep the blood pumping and to stay fit.

Window of wonders
We also get a good look at Pesquet's favourite part of the ISS – the place he is “most fond of” and where he no doubt spends a lot of time pondering the mysteries of the universe. It's the observation window.

“This is where we take a lot of our pictures of the Earth,” he smiles.

“We have a vertical view that is absolutely magnificent, and a window of incomparable optical quality that allows us to use cameras with very, very powerful lenses that can zoom in on the Earth.

“All the astronauts love to do this and everyone tries to find their favourite places.”