By Dr Dickson Amugsi - The Conversation 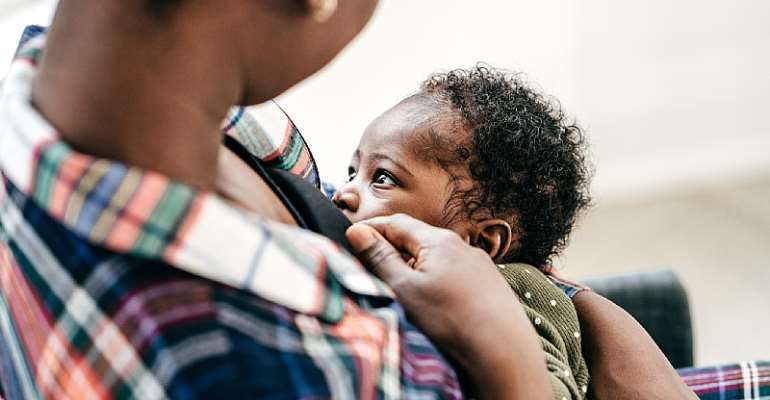 Exclusive breastfeeding in the first six months makes more difference to a baby&#39;s health and survival than any other intervention. - Source: GettyImages

Exclusive breastfeeding, the practice of giving only breast milk (no other food or water), is the ideal for an infant's first six months. Breast milk contains all the essential nutrients an infant needs at this stage.

Research has illuminated the longer-term health benefits of exclusive breastfeeding for the mother and child. These benefits include reducing the risk of overweight and obesity in childhood and adolescence and certain noncommunicable diseases later in life and enhancing human capital in adulthood. Additionally, breastfeeding reduces the risk of breast and ovarian cancers, type 2 diabetes and high blood pressure among mothers.

These are just a few of the benefits of exclusive breastfeeding. Overall, it makes more difference to a baby's health and survival than any other intervention . That's the reason why the World Health Organisation (WHO) includes it as a proven protective intervention in the Global Action Plan for Pneumonia and Diarrhoea.

Previous research has shown that the proportion of exclusively breastfed children remains low in many lower and middle-income countries, however.

As part of the Global Burden of Disease study , my colleagues and I recently published our analysis of data covering two decades (2000-2018) from 94 low- and middle-income countries. We examined the trends and prevalence of exclusive breastfeeding and projected the performance of countries in relation to WHO targets. This type of analysis can help countries formulate the necessary policies and interventions to promote breastfeeding practices.

Findings from our study

Total prevalence of exclusive breastfeeding increased (27% to 39%) across all countries during the study period (2000-2018). But we found significant variations between countries and within regions. This suggests intra-regional inequalities that need attention from leaders.

Read more: Malnutrition among children is rife in Nigeria. What must be done

Of the African countries, Chad and Somalia had the highest rates of annualised decline in exclusive breastfeeding practices during the study period.

Progress towards the 70% target

To estimate future prevalence, we assumed that current trends would continue. We first projected based on the initial target of 25% by 2025, followed by the updated target of at least 70% by 2030. In general, exclusive breastfeeding practices across the countries are expected to increase from 39% in 2018 to 43% by 2025. The practice level will increase to 45% by the end of the new targeted period of 2030. Although this is positive progress, it falls short of the 70% goal.

Our analysis projected six countries – Burundi, Cambodia, Lesotho, Peru, Rwanda and Sierra Leone – to meet 70% of exclusive breastfeeding prevalence by 2030. Eighty-eight of 94 countries are unlikely to meet the global nutrition target on exclusive breastfeeding by 2030. Only three countries (Burundi, Lesotho and Rwanda) are predicted to meet this target in all their sub-national level units (provinces and districts).

Several reasons may account for the poor performance of countries towards the goal. They include but are not limited to:

lack of attendance at antenatal care

Read more: What's missing in South Africa's strategy to get breastfeeding levels up

Breastfeeding requires a lot of effort from mothers and support from wider networks, including their families, communities, workplaces, health systems and government leadership.

strengthening links between health facilities and communities to support breastfeeding

These documented strategies can aid policy-makers in monitoring the success of breastfeeding policy and programme investments.

In conclusion, our study found that only six of the 94 low and middle income countries are on course to meet the WHO target of at least 70% exclusive breastfeeding prevalence by 2030. That means that 94% of the countries included in our study are unlikely to meet the target. This projected poor performance calls for deliberate efforts to promote exclusive breastfeeding for better child health and well-being. Robust policy interventions may still make it possible for some of these low and middle income states to achieve the target by 2030.

The original research of this paper was supported by Bill & Melinda Gates Foundation grant (OPP1132415) to the Institute of Health Metrics and Evaluation, University of Washington, USA. The content is solely the responsibility of the authors and does not necessarily represent the official views of the Bill & Melinda Gates Foundation. The author of the present paper, Dr Dickson Amugsi, who works with the African Population and Health Research Center has no conflict of interest to declare.