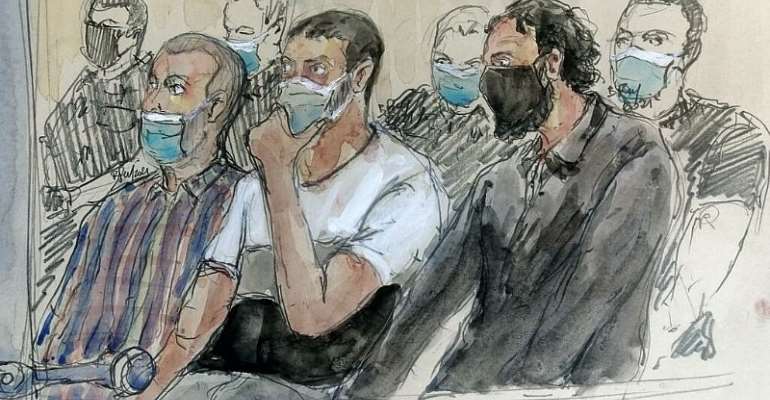 On the sixth day of their trial on terrorism offences, linked to the 13th of November 2015 attacks in Paris which cost 130 people their lives, the 14 accused were asked to give a brief reaction to the charges they face.

It took less than 15 minutes.
Sofien Ayari and Osama Krayem, told the court they had nothing to declare at this stage.

Mohammed Bakkali, suspected of having rented hideouts to the terrorist teams, said he admitted certain claims against him and rejected others.

Most of the accused managed to say a little more.
Long Wait
That they have waited a long time for this trial; that they are sorry for the victims; that they totally condemn the attacks and sympathise with the families; that they are ready to answer any questions.

Hamza Attou admitted that he drove Salah Abdeslam, the sole survivor of the killing squads, from Paris to Brussels on the night after the attacks.

"But I never wanted to be a terrorist," said Attou, who was 21-years-old at the time of the events.

Mohammed Amri was also in the car which brought Abdeslam back to Brussels but claims he had no idea what had happened in Paris.

Farid Kharkhach admitted his involvement in supplying false identity cards to the killers.

"I don't deny my part," he told the special court in Paris.

"But I had the misfortune to come in contact with these people, people I had never seen before. I had no way of knowing that the false papers would be linked to these massacres.

"My sister was ill at the time. I did it for the money. I'm so sorry for the harm that was done."

Hoping for justice
Abdellah Chouaa said he hoped for justice, insisting that he is completely innocent.

He is charged with criminal association with members of a terrorist group. He could go to jail for 20 years if found guilty.

Yassine Atar also says he is innocent, the victim of mistaken identity with his brother, Oussama, believed to have planned the Paris attacks.

"I'm here because of my family, but I am not Oussama Atar."

Oussama Atar is himself one of the 20 accused in this trial but his whereabouts are unknown.

Mohamed Abrini, "the man in the hat" who did not detonate his explosives during the Brussels airport attack, admitted that he was involved in the Paris project. But he denied providing transport and other support to the killers.

And then it was the turn of Abdeslam, the only one of the 10 Paris "commandos" to survive the night of 13 November.

Abdeslam blamed France for the Paris killings, claiming that the attacks were carried out to avenge the men, women and children killed by French air force bombing of Islamic State targets in Syria.

"The French aircraft which bombed Islamic State made no distinction between men, women and children, they destroyed everything in their way.  We wanted France to suffer the same pain as we were suffering."

The trial continues with evidence from special police investigators.