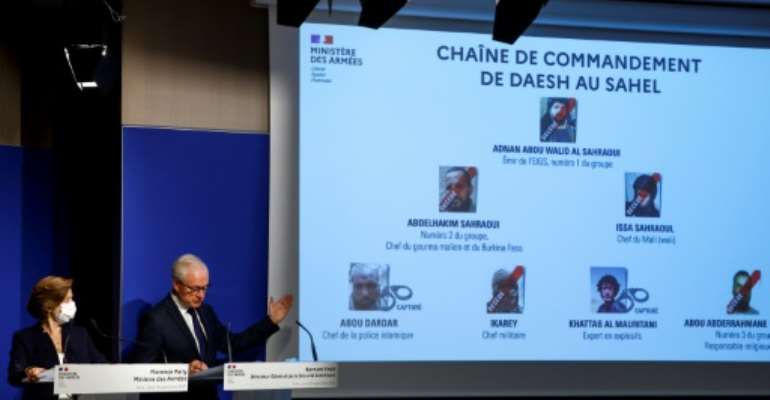 Adnan Abu Walid al-Sahrawi, considered one of the most ruthless jihadists in the Sahel and France's top enemy in the troubled African region, was declared killed on Thursday.

A rigid doctrinaire who earned a reputation for lopping off the hands of thieves, al-Sahrawi headed the highly active Islamic State affiliate in the central Sahel.

The so-called Islamic State in the Greater Sahara (ISGS) has been blamed for a string of bloody attacks across the vast semi-arid region.

It claimed responsibility for the ambush near the village of Tongo Tongo in Niger in 2017 that claimed the lives of four US special forces and four Nigerien troops.

The French army said Thursday that it had killed ISGS leader al-Sahrawi in an air strike while he riding on a motorbike in the north of the country, capping weeks of rumours that he had died.

French Defence Minister Florence Parly told RFI radio that he was targeted since he was "the uncontested, authoritarian leader" of the group.

Thought to be in his forties at the time of his death, al-Sahrawi wears a black turban and sports a black beard in the few known photos of him.

The Sahel has been engulfed in a brutal jihadist insurgency since Islamists seized control of northern Mali in 2012.

France, the former colonial power, intervened in Mali in 2013 and beat the jihadists back.

Despite the presence of foreign troops, jihadist violence has since spread into central Mali as well neighbouring Burkina Faso and Niger.

Al-Sahrawi's nom de guerre derives from his birthplace of Western Sahara, where he fought in the Polisario Front, which aims to end Moroccan rule.

He also spent part of his youth in Algeria, where experts he say he was drawn into jihadist circles.

Al-Sahrawi was involved in the Sahel insurgency from the outset, as a member of the Movement for Oneness and Jihad in West Africa (MUJAO), one of the Islamist militias that took control in northern Mali.

Before the French intervention, al-Sahrawi was a spokesman for the al-Qaeda-aligned MUJAO in the northern town of Gao.

There, he earned a reputation as an inflexible enforcer of Sharia law.

An elected official in the city, who requested anonymity, said that more thieves had their hands cut off in Gao than anywhere else.

"It is because of Abu Walid's instructions," he said, referring to al-Sahrawi.

MUJAO later merged with other groups to form the Al-Mourabitoune militia, under the leadership of Algerian Mokhtar Belmokhtar.

But in 2015, al-Sahrawi pledged allegiance to the Islamic State (IS) group, which at that time controlled swathes of Iraq and Syria.

Reportedly recruiting from the traditionally pastoralist Fulani group, ISGS is active in the lawless border region linking Mali, Burkina Faso and Niger, where it applies its harsh interpretation of Sharia law.

The jihadist group leapt to world prominence in 2017, however, after the attack in Niger that killed US special forces.

Between late 2019 and early 2020, ISGS was also behind a string of attacks on army bases in Mali, Burkina Faso and Niger which left hundreds of soldiers dead.

It was this spate of killings that prompted France, in January 2020, to designate al-Sahrawi as its "priority enemy" in the Sahel.

Specialists and security officials have characterised the jihadist commander as being indifferent to loss of life.

A Malian security official who declined to be named described al-Sahrawi as the "absolute master" of ISGS who was sometimes known to go in battle himself.