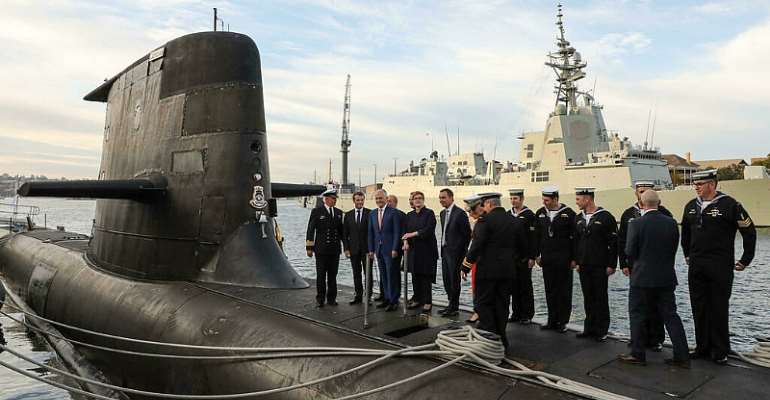 Australia has decided to invest in US nuclear-powered submarines and scrapped its contract with France to build diesel-electric submarines because of a changed strategic environment, Prime Minister Scott Morrison said on Thursday.

At the same time President Joe Biden on Wednesday announced a new US security alliance with Australia and Britain that would develop an Australian nuclear-powered submarine fleet.

As a result, Australia notified France that it would end its contract with state majority-owned DCNS to build 12 of the world's largest conventional submarines.

Australia has spent 2.4 billion Australian dollars (€1.5 billion) on the project since the French won the contract in 2016.

Angry reaction
In an angry first reaction, the French Senate issued a statement, saying that  the move would have "grave consequences," pointing out that it would have a "heavy impact" on French employment - workers at Naval Group, the company that would have been involved in the construction of the submarines, would be directly affected with the potential loss of "hundreds of jobs."

Naval Group, the company building the submarines, said in a tweet that the decision came as "a deception."

Recently France was taking steps to strengthen alliances in the "Quad" a strategic cooperation between Australia, Japan, India and the US, and as a consequence the "coherence between Western partners."

Pointing at the "sudden US retreat from Afghanistan, organised without any consultation with Nato allies" the latest move should lead to "an assesment of the actual relationship" between France and its "historic ally."

In June, the French arms industry also suffered a blow when Switzerland decided to buy 36 US-made F35 fighterjets rather than the French Rafale.

"I am deeply shocked by this news," said Christain Cambon, president of the Senate Commission for Foreign Affairs, Defense and Armed Forces, caused by the "recurring attitude of certain allies who behave more like enemies than like loyal competitiors."

“It was really a stab in the back. We built a relationship of trust with Australia, and this trust was betrayed,” Le Drian said.

“I'm angry today. This is not done between allies," he added. "We are demanding explanations from both sides.”

"They've been good partners. This is about our strategic interest, our strategic capability requirements and a changed strategic environment and we've had to take that decision.”

“Our strategic environment has deteriorated,” Campbell said. “That challenging environment is becoming more challenging and is set to do so into the future at an accelerated pace.”

Australia has not yet decided what class of submarine it would select and did not know how much the nuclear fleet of at least eight submarines would cost, Morrison said.