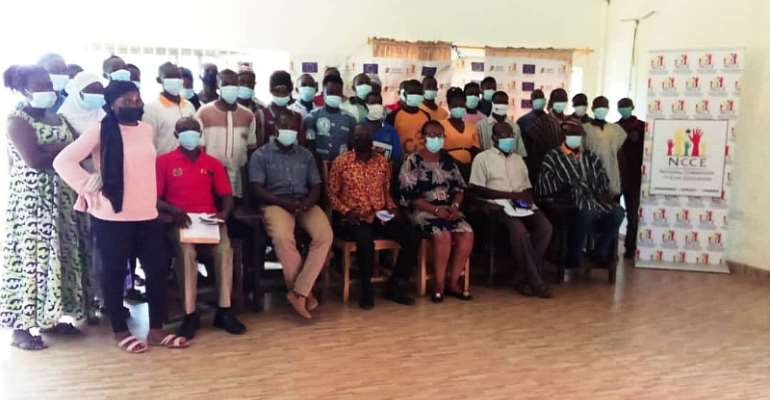 The National Commission for Civic Education (NCCE) in the Daffiama-Bussia-Issa District has organized a day stakeholder’s engagement workshop to sensitized community-level actors to end violence extremism and peacebuilding initiatives.

In opening the session, Mr. Abdul- Rahaman Osman the District Director of the NCCE notes the engagement is to sensitize stakeholders on the need to promote inclusion, tolerance and attributes of good citizenry.

The NORPREVSEC project is being funded by the European Union, a long standing partner to the NCCE in Ghana, he added.

Mr. Abdul- Rahaman Osman particularly indicated that violent extremist is an emerging concern giving the rising space of global radicalism and for that, the project is a stopgap to addressed issues of violent extremism and conflicts.

The Deputy Regional Director Mr. John Yibile indicated that it is appropriate for Ghana to be on the alert giving the rising spade of Islamic extremism in the sub-region.

He said, "the Islamist activities in Mali, Chad, Nigeria & Neighbouring Burkina Faso could lead to spillover". He noted that all hands must be on deck to promote tolerance and national cohesion.

Speaking further on the public order act, he indicated the need for the community to be more law-abiding and follow due process; especially in setting up watchdog committees; local Communities must put the Ghana Police Service on the page for the actions so desired to be taken. He concluded that, in organizing a peaceful protest or demonstration or massive party rally, the police must be notified early to provide security.

The Chief Executive Officer of Ideapath Consult and a Development Consultant Mr. Tahiru Lukman speaking on violent extremism with emphasis on religion, ethnic and political-ideological front is a threat to national cohesion and co-existence. He urged participants and stakeholders to take interest in their community development initiatives by been vigilant and willing to report potential extremists to appropriate authorities.

The chairman for the occasion Mr. Rev. Fr. Francis Voe-ngna reiterated the need for peaceful co-existence, tolerance of divergent views, reforms in the attitude of concealing crimes and promotion of good governance and participatory democracy.

At the end of the session, the following were five (5) action points issued as a communique to promote peacebuilding as well as ending violence extremism;