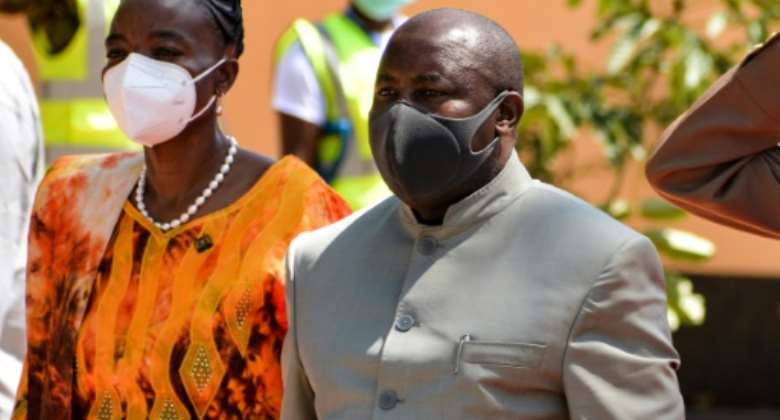 Observers had hoped that Ndayishimiye's government would help the country turn a corner and improve its human rights record. By Brian ONGORO (AFP/File)

Despite Burundian President Evariste Ndayishimiye's pledges to end repression, the human rights situation in the East African country has "deteriorated" in the 15 months since he took office, United Nations investigators said Thursday.

Ndayishimiye's election last year had raised hopes of a more open political environment emerging after many years of violence and severe rights violations in the troubled nation.

But in a report released Thursday, the UN Commission of Inquiry on Burundi said that although the authorities appeared to have eased some restrictions, conditions had actually worsened for opposition parties, journalists and NGOs, which are facing a renewed crackdown.

"Since President Ndayishimiye's inauguration 15 months ago, not only have grave human rights violations continued to occur, but in some respects the situation has deteriorated," commission chairman Doudou Diene said in a statement.

"Members of opposition parties... are still regularly targeted by abusive restrictions and are subject to grave human rights violations such as disappearances, arbitrary arrests and detentions and torture," the UN statement said.

Observers had hoped that Ndayishimiye's government would help the country turn a corner and improve its human rights record, but UN investigators said Burundian security forces were still committing violations.

"They continue to enjoy widespread impunity for their actions, as has been the case since 2015," the statement said.

Burundi has been in crisis since 2015, when then president Pierre Nkurunziza ran for a third term and was re-elected in polls boycotted by most of the opposition.

At least 1,200 people were killed and more than 400,000 forced into exile as a result of violence which the UN says was mostly carried out by state security forces.

Nkurunziza remained in power until elections in May 2020 handed the presidency to his handpicked successor Ndayishimiye, and died soon after the vote.

The commission was created by the UN Human Rights Council five years ago to investigate abuses.

Although there have been some signs of easing, the overall picture remains grim, the UN statement said.

"While lifting some sanctions imposed on civil society and the media and releasing some human rights defenders and journalists, the government took measures, in parallel, to tighten its control on the work of international NGOs and regularly manifests hostility towards independent journalism."

Lack of toilet facility in a school causes pregnancy of 15-y...
55 minutes ago