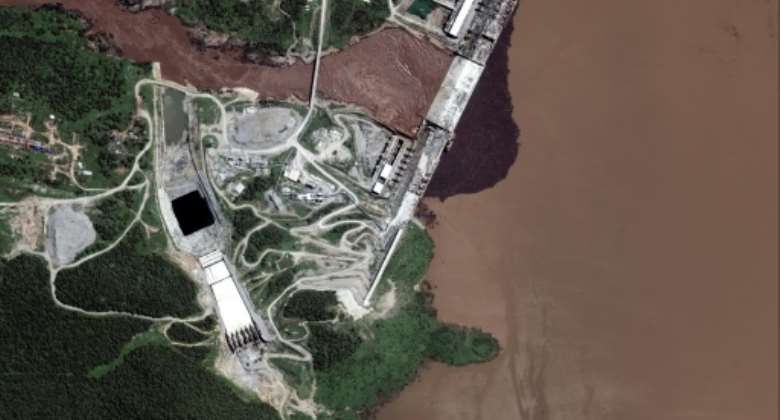 Ethiopia has been filling the reservoir behind its huge dam on the Blue Nile for the past two years, as talks with downstream countries Egypt and Sudan drag on. By Handout (Satellite image Â©2020 Maxar Technologies/AFP/File)

Egypt and Sudan have expressed readiness to resume talks with Ethiopia on its controversial Nile dam after the UN Security Council urged the three governments to swiftly reach a binding deal.

The Grand Ethiopian Renaissance Dam, set to be Africa's largest hydroelectric project when completed, has sparked an almost decade-long diplomatic stand-off between Ethiopia and downstream nations Egypt and Sudan.

On Wednesday, the UN Security Council adopted a statement encouraging the three countries to resume negotiations under the auspices of the African Union to swiftly conclude a binding deal.

The Egyptian foreign ministry welcomed the Security Council statement as an "important impetus" for success in renewed talks.

Sudan backed the resumption of AU-led talks during a Wednesday visit by a delegation from the Democratic Republic of Congo, the current AU chair.

The Sudanese foreign ministry said it wanted changes to the "ineffective method that has characterised previous rounds of negotiation."

The DRC delegation, headed by Foreign Minister Christophe Lutundula, is also visiting Egypt and Ethiopia on a tour dedicated to resolving the long-running dispute.

It handed Sudan a document setting out the remaining points of contention between the three governments.

Egypt and Sudan have been pressing Ethiopia to sign a binding agreement on the filling and operation of its dam on the Blue Nile ever since work first started on the project in 2011.

The three governments have held multiple rounds of talks but so far there has been no sign of any breakthrough.

Sudan hopes the project will regulate annual flooding, but fears its own dams could be harmed without agreement on the GERD's operation.

In July, Ethiopia announced it had reached its target for the second year of filling the vast reservoir behind the dam.

“We've not thrown hands up in despair, gov't determined to b...
16 minutes ago