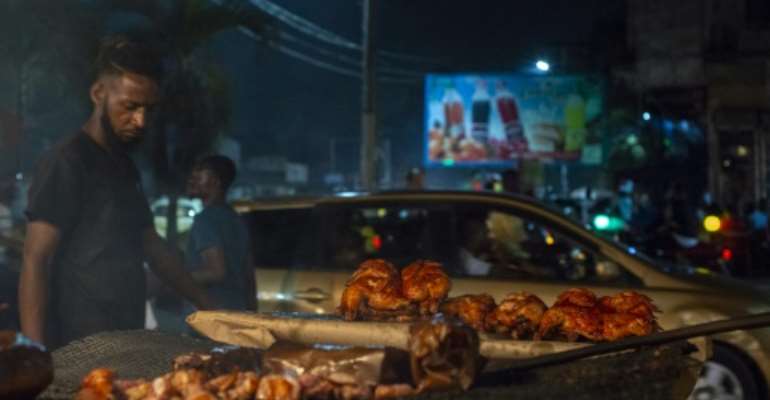 Kinshasa has been dependent on imported frozen chicken for years -- there isn't enough local produce to sustain this bustling, 12-million-strong city. By ARSENE MPIANA (AFP)

Frozen chicken, deemed more convenient and cheaper than fresh poultry that needs to be killed and plucked, is hugely popular in Kinshasa where residents have grown dependent on it.

So much so that it is at the heart of a battle between the Congolese government, which has promised to slash the prices of basic necessities including frozen goods, and importers and wholesalers, who refuse to play ball.

At a frozen goods stall in the capital's sprawling Gambela market, Sandra has had to forgo her usual 10-kg (22-pound) box of frozen chicken.

That's too expensive for her, so she resorts to buying frozen sausages and fries instead.

Kinshasa has been dependent on imported frozen food for years -- there just isn't enough local produce to sustain this bustling, 12-million-strong city.

The larger-scale agro-industry, meanwhile, has never taken off, beset by corruption.

In June, faced with a population struggling to make ends meet in a faltering economy made worse by the Covid-19 pandemic, the government announced it would slash the prices of frozen goods as well as domestic air fares.

Kinshasa has been dependent on imported frozen food for years -- there just isn't enough local produce to sustain this bustling, 12-million-strong city. By ARSENE MPIANA (AFP)

It ordered importers to halve the price of 10-kg boxes of frozen chicken.

Frozen shad and pork chops were also targeted, albeit with a smaller price cut.

Authorities claim importers are charging too much for these goods, deliberately underestimating their value to pay lower customs taxes, and then selling them to wholesalers at a real or inflated value.

The wholesalers themselves then hoard the goods or slow down their sales to local shops, squeezing the supply of frozen produce on the market and causing prices to rise, authorities say.

At Gambela market, asked why she buys frozen goods imported from countries as far away as Brazil, Belgium, Argentina, the United States and China, sometimes stored in dubious conditions, Sandra responds it is just more convenient than buying live chicken.

And usually, it's cheaper.

"Reducing the price of frozen food is a good decision", says Hugues, manager of the frozen foods store "The Resurrection".

But he says that in practice, it's just not happening.

"The importers are Lebanese, Indian... they control the market," he says. "The wholesalers don't want to lower the prices (and) we can't do it either."

Refusing to take responsibility for the blockage, frozen goods stores went on strike for two days earlier this month.

But the system is corrupt and lacks transparency, making change difficult.

"Everyone is aware of what is going on," says one importer, asking to remain anonymous.

The market, he adds, is huge -- worth hundreds of thousands of dollars a day.

After weeks of gridlock, the government has said it will take matters into its own hands and "flood" the market with frozen goods.

The economy ministry said it plans to buy the produce directly from exporters and distribute it to stores, cutting out the importers and wholesalers altogether.

"So that products don't go out of stock and consumers are not penalised," it said.

But Michel Bisa Kibul, a politics and governance professor, said the government's approach was all wrong.

They should be "concerned about getting good local produce," and supporting DR Congo's agro-industry instead of wanting to flood the market "with cheap frozen goods", he said.

As he noted, the Democratic Republic of Congo has 800,000 square kilometres (300,000 square miles) of arable land and countless waterways full of fish.