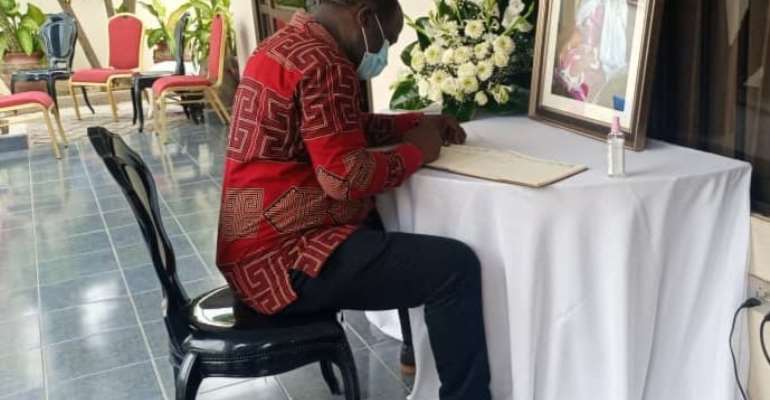 Honorable Kwabena Abankwa-Yeboah has expressed his deepest condolences to His Excellency the Vice President and his family at the passing of his mother, Hajia Mariama Bawumia.

The death of Hajia Mariama came as a shock on Monday 13th September, 2021. The President of the Republic of Ghana was present to commiserate with his Vice.

Among the National Executives of the NPP who went to express their sympathies with Honourable Abankwa-Yeboah were, the National Chairman, Mr. Freddie Blay, the chief scribe of the party, Mr. John Boadu, National Women‟s organizer Madam Kate Gyamfua, the National first vice Madam Rita Asobayere and the National Nasara coordinator Mr Haziz Futa.

They all signed the book of condolence to show how painful her death has hit the elephant family. Hajia

Mariam Bawumia was just about to celebrate her 82nd birthday before her demise on September 13th 2021.

On his part, Honorable Kwabena Abankwah-Yeboah, the incumbent National Treasurer and National Chairman hopeful reiterated that Hajia Mariama Bawumia had been a good mother and done her part.

“She had been able to raise a son, not just a son, but a vibrant and intelligent son to become the 2nd gentleman of the land, an accomplishment, which cannot be explained away as a mean achievement”. He also advised that many should see her as a role model and learn to inculcate good values and good virtues in the upbringing of their wards, for national development. „It is very painful to lose a mother, but it is Allah who gives and it is the same Allah that takes," he stated.

Burial of the Late Hajia Mariama took place at Kperiga in the North East Region on 14th September, 2021.