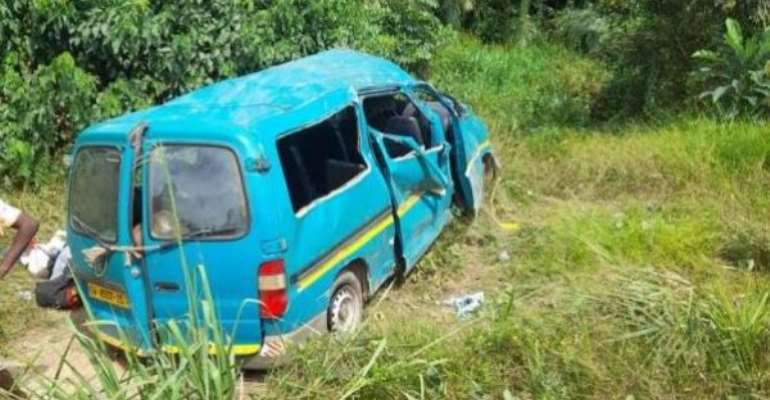 A Toyota Hiace which was transporting 17 passengers to Prestea in the Western Region was involved in a road accident killing six persons and injured many others.

Four of the victims are in critical condition, one has been discharged and six are responding to treatment at the Apinto Government and Tarkwa Municipal hospitals.

The accident occurred on Monday, September 13, 2021, around Huni-Ano, a community along the Tarkwa-Bogoso Highway.

Sergeant Patrick Anyamu, an officer at the Divisional Motor Transport and Traffic Directorate (MTTD) office at Tarkwa, who confirmed the incident to the Ghana News Agency (GNA), said Emmanuel Arthur, 33, was driving the Toyota Hiace with registration number GW 8557-21 from Takoradi to Prestea.

He said upon reaching a spot at Huni-Ano the suspect driver who was allegedly speeding attempted to overtake two vehicles but reportedly bumped into a Kia truck with registration number GT 2652-19 which was being driven by Richard Egyiri and in the process somersaulted many times.

Mr Anyamu said all the occupants and the driver in the Toyota Hiace sustained injuries and were quickly rushed to the Apinto Government and Tarkwa Municipal hospitals for treatment, but four women and two men passed away.

He said the bodies of the deceased have been deposited at the Tarkwa Municipal hospital mortuary for autopsy, adding that, the two drivers have also been ordered to report to the police station to assist investigation.